Yesterday's nearly day long rain forced the cancellation of two games which had to be made up for today. The result was baseball being played at Avon from 9am through to 11 at nights. Here is what happened.

Then Central Michigan and Miami played half a game before the rain set in, the rain lasted all day and moved the completion of that game to early Friday morning, as if that was not enough the game would go into extra innings. Nate Bowles extended his career and Miami's season Friday morning with pinch-hit, walk-off single, lifting to the RedHawks to a 6-5.

Kent, the regular season champion, took on Miami in an elimination game and showed no signs of sluggishness from their earlier defeat at the hands of Ball State. Kent blanked Miami 7-0 Casey Wilson complete game shutout.

In the final game of the night Buffalo took on Toledo in a rematch of Wednesday's exciting 12-10 see saw battle. This night however would belong to Toledo Pitchers who held UB to just one run during the Rockets 4-1 victory. 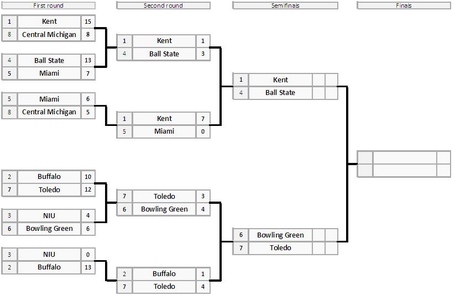