One side of the bracket went exactly as expected. The other? well it is the MAC afterall.

The Kent side of the bracket sent the best through to the second round while the Buffalo side saw its top seeds fall, each now facing a sudden death game first thing in the morning.

The day started with Miami jumping all over Ball State only to see the Cards road back in the middle innings. By the time the game was over the Cardinals had 17 total hits. Cody Campbell was 3-for-5 from the plate with a triple and a homerun. Campbell also had three RBI and two runs. Blake Beemer also went 3-for-5 which included a double, two RBI and three runs. T.J. Weir went 3-for-4 with a homerun and Sam Tidaback was a perfect 3-for-3 while hitting a triple and a homerun.

The only close game of the day came Next as Bowling Green would scratch and claw back into their game against Northern Illinois. It took 11 innings but the #6 Falcon's eventually dispatched the Huskies.

NIU scored 4 runs early and NIU scored a run here or there but the Falcons pitchers are the ones that kept him in the game. They would throw seven straight scoreless innings while Bowling Green chipped away at the lead and eventually deliver in the 11th.

Buffalo and Toledo exchanged blows all Night with UB taking an early lead before Toledo overtook them in the 8th. Then, in the bottom of the 8th Buffalo nailed hit a two run homer to tie the game. The excitement was short lived as the rockets put two more runs on the board in the ninth to secure the win.

The top seeded Flashes were the only team who never took their poot off the gas. Kent built up a 15-4 going into the 9th. Kent State was fueled by nine runs through the first two innings and never looked back with Taylor Williams on the mound for seven innings. Offensively, Justin Wagler led the Golden Flashes, going 4-for-5 with a home run, a double and five RBIs. 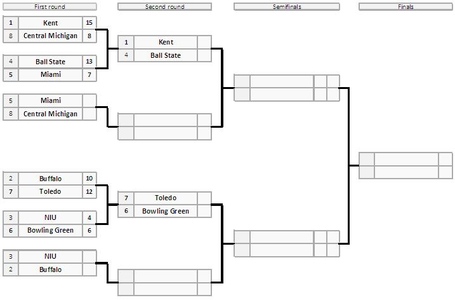