Seems as if Director white is trying to get UB into venues that are better known by the people of Buffalo. 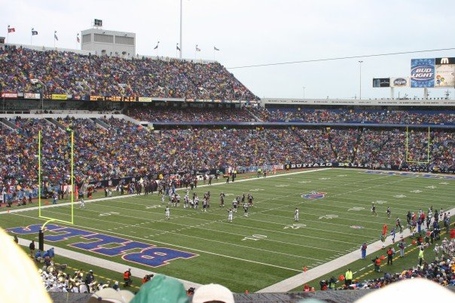 UB Will be taking their first crack at "The Ralph" this season. Unfortunately the opponent is not a big name and the date leaves a lot to be desired. But it's a start and will maybe show a modest bump over past black Friday home dates. This is as good as a metric as you can get given UB's last Black Friday home game was also against the Falcons in 2011, and "officially" drew a scant 12,000.

Other MAC teams have had luck using NFL stadiums to host games but usually the key is to draw huge crowds from their opponents. Toledo hosted Ohio State in Cleveland and Miami Hosted Kentucky in Cincinnati. It can work but the challenge is finding a big team to do it who's fans travel well.

Buffalo is in the middle of a College football desert. The only well traveling program near us might be Syracuse but the Orange have wanted two, or even three games in their house for just one on the road.

UB has hosted Pitt and UConn in recent years and those games have been moderately better than their average contest but none topped 25 thousand.

In they hypothetical world where UB can get some traction with the Buffalo football culture and perhaps arrive at a point where averaging attendance is 25-30 thousand per game then the Ralph would be a good venue for marquee events which might push the limits of UB stadium.

UB has been able to get some big names teams to come play at UB in the past. UConn, Pitt, North Carolina and others have all made the trip up to Amherst to take on UB in the friendly confines of Alumni Arena. It may involve 2:1's or other concessions but like those football pay check games teach us, some times you have to give to get.

The City of Buffalo has hosted rounds of the NCAA tournament, at the First Niagara Center, in the recent past. The games have been well attended and had a first class production value.

There is no doubt that Buffalo has a hockey culture and not a hoops mentality but there is no pro team to compete with. Even the slightest undercurrent of a basketball culture in the Queen City is UB's for the taking if they can make a trip or two to the dance in the next few years. There is enough basketball interest Buffalo to sell out Alumni Arena if UB is fielding a tournament caliber team the school brings in a high profile opponent.

If you can sell out the six thousand seat Alumni Arena why not settle into the 19,000 seat First Niagara Center. You might not pack the place but half capacity is realistic. It's location at the end of the light rail line could also mean that getting the students from Campus to the game would not be too much of an obstacle. (oh if only NAFTA would extend that rail from the south campus to the North Campus) 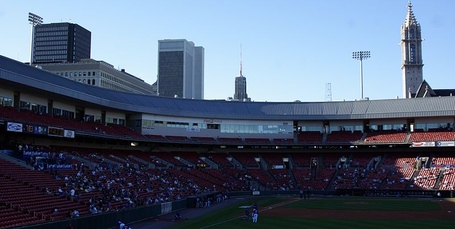 This is less about meeting student demand and bringing in a big name than it is about satisfying the need for early spring baseball home dates that UB can not seem to meet at their current faculties.

So far this season UB has "hosted" two conference series in Monroe County. Meanwhile the Bison's have been playing home games since April 4th. Coca Cola Field is an awesome facility which can handle a Buffalo Spring without having the field fall apart.

It's not a well known fact outside of Buffalo but Buffalonians do like their baseball. Triple-A Exhibition games played in early April this season drew almost ten thousand fans despite the freezing drizzle of a Western New York spring.

The Rich Family has deep ties with UB and might be convinced to have UB play some of their April home baseball games a couple hours ahead of scheduled Bison's match-ups. As something of a free gift to those Bison fans who have been waiting months to sit at a baseball game.

Surely it won't hurt the Bisons to have a local college named "Buffalo" play the undercard for their April and may games. So long as UB is prepared to rejigger their schedule in the event that games have to be made up this is a no lose relationship.

In addition to the early season games where weather is a factor why not try to get senior day at the stadium?

Like the First Niagara Center it's about a block from the rail. The question is could the owners, the city of Buffalo, be convinced to let UB use the stadium either gratis, or at a fee which matches what they have to pay Monroe Community College for the use of their facilities. 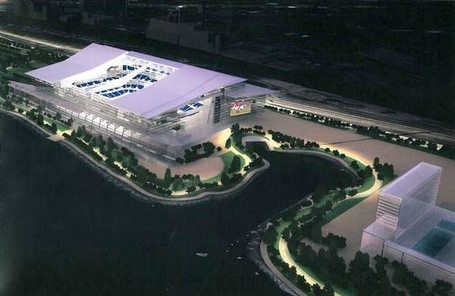 There is a group trying to build a new sports and entertainment complex on the outskirts of downtown buffalo.

A 72,000 seat retractable roof stadium and convention center would sit on Buffalo's outer harbor. Also attached to the plan is a hotel and sports museum plan for the Buffalo. At 1.4 Billion dollars I doubt New York is going to jump all over this project but the people behind this say they have 15 private and as yet undisclosed sponsors who are willing to fund the project.

If completed this would be about a half mile from the first Niagara Center and would likely have rail access to the south campus. This is the venue worth trading a 2:1 or 3:1 to a BCS power if it means a sell out.

When Danny White came to UB one of the first things he did was shot down the notion he even wanted to compete with the Professional sports team in Buffalo. Even if UB could "compete" for fans such an endeavor would be far less profitable than playing nice with them.

Starting to nicely approach the professional teams and presenting them with the positives of for both parties in using their facilities could be a first step in rounding out the sports culture of Buffalo to include College athletics, which is a distinctly different and yet enjoyable experience than professional sports.