In the spirit of Conrad's earlier research into our opponents and who hates them I went over to ZipsNation.

Zips nation is where Akron fans generally congregate and nobody hates Kent quite like the folks at Akron. You can't even type Kent on their website, go ahead and try.

So I asked this bastion of pure "Can't" hatred why people should hate their rival. Here is what they had to say.

The Root of it seems to be a feeling that Kent Worked against Akron's admission to the Mid American Conference.

Why should I hate Can't (From a Buffalo Fan) - ZipsNation.Org
I think we would have been in the MAC decades ago if the Flushes hadn't "black balled" us. At the time, we were a municipal university, and they used that as an excuse to exclude us from the MAC. -- Ham

That Kind of pettiness has not stopped since Akron made it to the MAC.

Why should I hate Can't (From a Buffalo Fan) - ZipsNation.Org
The reasons are many and legend. One that sticks out to me was when Zippy was in the running for the Capital One Mascot of the Year back in 2007. The voting was intense. We soon learned that Cantsuckies were block voting AGAINST the loveable Roo. Zippy won despite the sick bas-TARDS. -- GoZips

Of course it's not just the fans that have made the relationship what it is. The players have done their part.

This has led to the general Akron Fan feeling that.

Why should I hate Can't (From a Buffalo Fan) - ZipsNation.Org
I hate how orange the lighting in the MAC Center is. It's easily the worst I've ever seen, anywhere.

I hate how they claim that p*ss-yellow on their uniforms and logo is actually gold.

I hate how their stupid mascot and his stupid teeth. I hate how they pretend to do important technological research, but when asked about it, can't name one thing they've contributed to since one of their professors invented LCDs forty years ago.

I hate how they convinced the state of Ohio to grant them the status of a "historic residential" university, despite the fact that Akron was established forty years earlier (1870, compared to 1910), and has more residential students living on or adjacent to the main campus.

I hate how they claim to be the second-largest university in Ohio, but only if you count the extra 20,000 students that use their myriad branch campuses as a substitute for community college. -ZachTheZip

A few years back Kent's season motto was "every minute" 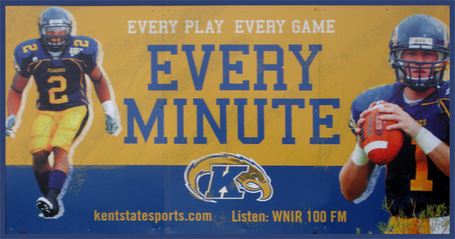 Here is what Akron Fans did with that.. 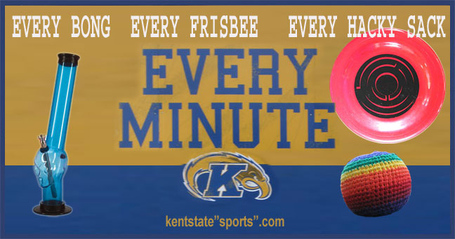 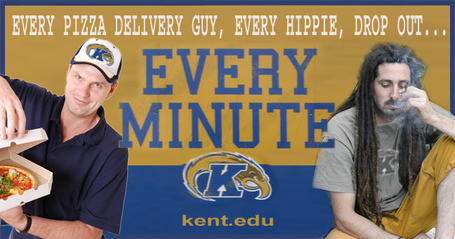