The goal of the pregame meal is to Hydrate, Nutritionate, and Player Hate. It is your bulletin board's bulletin board material. The Pregame Meal also delivers 10 factors that will decide the game, and over 50% of those factors are actual football facts. After the game, I revisit it all, during the postgame meal.

Share All sharing options for: The Pregame Meal: Is Branchflower Earning $35/Yd?

Clams: Ow-ah clams are better! Friend of the program Ben Tsujimoto found the best clams in Buffalo a few months back. I'll go with the Liberty Hound cause it's on the waterfront...will it be open this weekend? I don't know.

Q&A With the Pregame Meal:

Submit your real or fake questions I guess to Twitter I may or may not answer them sarcastically:

I assume the question is "What should I do when the entire UMass football team parades past me?"

A: GET OUT OF THE WAY...because we wouldn't want you hurting a Minuteman...as we learned last year, the Minutemen are especially susceptible to being pushed backwards by people standing directly in front of them going straight ahead.

Just part of the learning process in the transition from FCS to FBS. In 2014 expect UMass to learn how to move around objects and in 2015 the ability to push back at things coming directly at them should develop.

A: They are sad...why are they emphasizing MASS? Aren't they proud to be Amherst? It's a slap in the face to all Amherstonians. All in? More like All Out...they can't wait to move the whole University to Foxborough and connect it to Boston via high speed rail paid for by our hard earned debt ceiling money!

A: Yes UMass won, but no UMass should not dream big...last week's win was more of a nightmare in Miami's inception than a UMass dream. Once Miami goes dream in a dream in a dream, they can go from worst to first and win the MAC Championship out of nowhere again #TheSeasonThatShouldNotBeNamed

"How can UMass compete in the MAC" 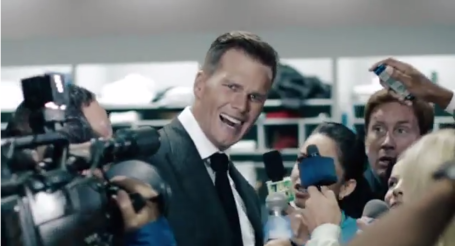 Step 3: Get out of Brady's locker, in fact get out of Gillette, take it back to Amherst.

Step 4: UMass restricts the marketplace to Massachusetts, change name to UNortheast...no not Northeastern, UNortheast, not confusing.

Step 5: Make the godfather an offer he can't refuse, and by that I mean fire him.

Step 6: Bring in the big guns.

Step 7: Play at your new on campus stadium: 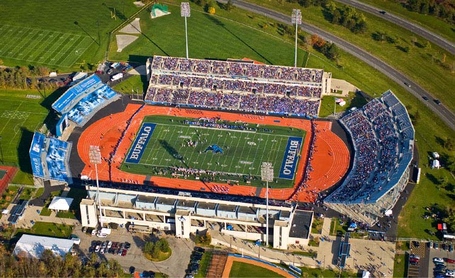 Step 7: HA! I didn't say which Amherst to move to on step 3, but it's the better Amherst, the New York one.

Step 8: UMass Football is now the 4-2 State University of the Northeast at Buffalo Bulls and very competitive in the MAC.

11 Factors to decide the game

That is $3,430 in illegal benefits earned for just last week's effort. I for one think UMass should do the right thing and sit the young tight end until the NCAA can figure this one out.

If UMass does play Rob Blanchflower, the X-Factor matchup will be Blanchflower vs. Redden.

Blanchflower missed the first 3 games of the year and then caught 10 balls for 58 yards against good opponents Vandy and Bowling Green. Last week Blanchflower exploded for 5 catches 98 yards and a touchdown. Despite missing 3 games, he is already 2nd in the team in receptions, receiving yards and receiving touchdowns.

Last year, Blanchflower caught 4 balls for 44 yards and a score to help propel UMass to an early lead 13-0 lead.

Since then a hack was installed into the Tepper defense, Adam Redden. Instead of awkwardly dropping a linebacker to play his flex-coverage role, Tepper taught a safety to play linebacker. The results have been spectacular:

In the meantime, UB has only allowed 14 receptions for 142 yards and 0 TDs to Tight Ends this year.

Advantage: Push - Blanchflower is a NFL ready target hard to eliminate him totally, but UMass doesn't have enough depth to match up to UB's strong defense.