What would make you happy with the QB play?

Share All sharing options for: What would make you happy with the QB play? 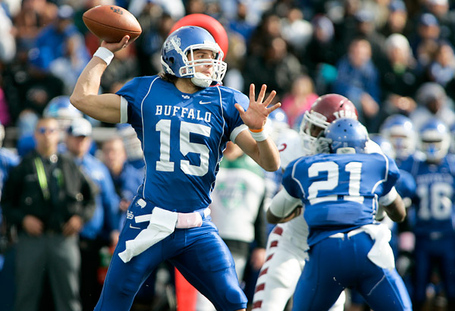 Time to begin another season of UB football. This is a very interesting year. No big name QB to lead this team to the promise land. Two plus years under Quinn to adapt to his style of ball. Players getting National Recognition. No respect from any media source. I am very excited to see how UB stacks up against MAC play this year.

I really only have one concern, and it is the same concern the past three years. Who is going to make plays behind center.

I would be interested to see what would make you satisfied with the QB play after three games into the season. Tough task to ask any QB to face Georgia's D especially with a beast at nose tackle. Also, I am not 100% sure that Neutz is back to 100%. Also not proven season long WR after Neutz yet.

Conversely, then you have a game against Morgan State that allows you much more time. The WR's will have the ability to create more separation. Then the third game of the season will test Alex Zordich against MAC talent against Kent. I will be willing to throw out the results after Georgia but I do want to see Zordich's arm throwing the ball and making an attempt to keep the LB's and safeties respect the pass. More after the jump.....

If after three games, the Bulls offense is run Bo Oliver and then run Bo Oliver some more, it will be interesting to see if Licata is looked at to try to take over.

My personal hope is that Alex has picked up a ton the past two years. It has been a long time since his ribs were cracked. But then it was get the ball, make a cursory look up field, shuffle his feet and take off. Part of the quick take off was lack of experience and also the O line was not a good as this year. For this year to be a success, two things have to happen for me. That is a QB to make plays and a WR or two to step up. I, like just about everyone else, felling comfortable with the running game and feel that the O line will be a strength. The D will be solid. Have some play makers and I am betting on the secondary to surprise many this year. Feel confident in the kicking game and holding my breath on punt/ko returns. Come on Bulls, shock me and make me eat all my words. GO BULLS!