Share All sharing options for: 99 for 99 - #51 - Records Tumble but UB Fumbles Against Kent

November 28, 2008 - Buffalo 21, Kent State 24 - James Starks and Naaman Roosevelt cap off historic seasons, but fail to finish the season with a win. 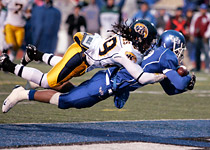 A week after clinching the MAC East, the 7-4 Bulls faced the 3-8 Golden Flashes at UB Stadium. Buffalo looked to win 8 games for the first time in 12 years, and to win 5 home games for the first time in 25 years. Although the Buls were not able to win, Starks and Roosevelt climbed to the top of the UB record books, ensuring the 2008 team would go down as one of UB's best.

Buffalo started strong and scored on their first drive, propelled by a 55 yard James Starks run. Drew Willy sneaked in from the 1, and Buffalo led 7-0. The Flashes responded in kind, with a 50-yard touchdown run by Eugene Jarvis. "Quarterback"* Julian Edelman twice drove the Flashes into field goal range, Kent only converted once, taking a 10-7 lead into halftime.

In the third period, Buffalo re-took the lead thanks to Naaman Roosevelt. The box score shows James Starks scored the go ahead touchdown from the 3 but Roosevelt was the motor of the 80-yard drive. Naaman gained 73 of those yards including receptions of 20 and 30 yards. UB's next drive stalled at the 25 yard line after Naaman received a 3 yard pass on 3rd and 8. On that play, Roosevelt became UB's all time single-season receiving yards leader. Drew Haddad set the previous record, 1158 yards, in 1999. On the next play, UB's AJ Principe missed a 42-yard field goal that would have given Buffalo a 7 point lead. Principe for his career was amazing under 40 yards, 40 for 43, 93%, but struggled from beyond 40, 4 for 18, 22%. 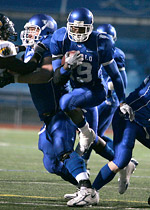 Aided by a roughing the passer call, Kent marched down the field in 6 plays and took the lead on Eugene Jarvis' second touchdown. Buffalo responded again, first with a good return by Ernest Jackson to the 41. On the second play of the drive, Starks broke a 13 yard run. With that run, Starks broke O.D. Underwood's single season rushing record. Underwood ran for 1,189 yards in 11 games during the 1986 season.

The drive was capped by Naaman Roosevelt's 23 yard touchdown reception. The score gave Buffalo a 21-17 lead in the game. With the catch, Roosevelt tied Chris D'Amico with 10 receiving touchdowns, a UB record set in 1983. Roosevelt's touchdown was also his 86th reception of the year, breaking Drew Haddad's record of 85 set in 1999.

Kent responded again, taking a 24-21 lead with 6 minutes remaining in the game. Buffalo almost coughed the game up, when Domonic Cook fumbled the kick return, but Buffalo recovered and marched down the field. At the 7-yard line, Drew Willy hit Brett Hamlin but just before he fell into the end zone, the ball was jarred loose and recovered for a touchback by Kent State. Buffalo was unable to get the ball back, and the Bulls fell 24-21.

*Edelman threw for 114 yards, but ran for 167 yards, returned 2 punts, and punted twice, making him more of a Wildcat Running Back than a Quarterback. He currently plays WR/DB/Special Teams for the New England Patriots. I as a general rule, never consider anyone who lines up under center at Kent State to be a Quarterback.