Buffalo and Maine came into the game with many similarities: Buffalo headed to their final game ranked #8 in the Lambert Poll, Maine was ranked #7, both teams sought to improve from 3-8 in 1995 to 8-3 in 1996 and both teams had outside shots to get an invite into the 16 team Division 1-AA playoff, the loser's hopes would be dead. The two teams ended their seasons with an epic gunfight.

Maine opened the scoring with a field goal, and Buffalo answered with a 71-yard touchdown run by Todd Pace on UB's second play of the game. A missed extra point made it 6-3 Buffalo. After a Carlson field goal put the Bulls up 6, UB's next drive ended abruptly with a interception by Maine's Eric Lewis. Pam ran for an 11 yard touchdown to give Maine a 10-9 lead. Buffalo responded again, this time by successfully converting 5 third downs, on a methodical 80 yard drive that ended with a 1 yard Swan touchdown. Maine reached the Bulls 6 yard line twice in the 2nd quarter: the first time they had their short field goal try blocked, the second time however Maine took a 17-16 halftime lead when Pam scored his 2nd touchdown with 22 seconds left.

In the second half Maine quickly stopped the bulls, but UB faked a punt and kept the drive alive. Taylor then hit Gasparre on a slant, the corner played the ball instead of the man and Gasparre took off for a 60 yard touchdown. After another missed extra point, UB led 22-17. On Maine's next drive, Pam scored his 3rd touchdown of the night taking a sweep 63 yards for a touchdown. The two point converstion failed, and Maine led 23-22. With 2:30 left in the 3rd Kali Watkins blew by the coverage and Taylor hit him for a 87 yard strike. Watkins had 5 receptions for 147 yards on the day. The throw was the 3rd (now 4th) longest pass play in UB history. Today Mark Taylor holds the longest and the 4th longest passing plays in UB history. After a failed 2 pt conversion, UB took a 28-23 lead into the final quarter. 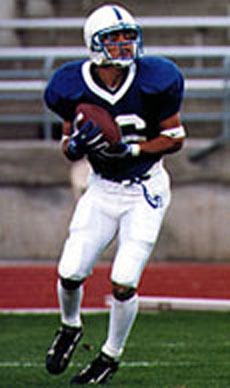 Midway through the 4th quarter UB had the ball hoping to push the lead to two possessions. Instead, Taylor threw his third interception of the day,setting up a 14 TD yard run by Jameson. After a 2 pt converstion, Maine took a 31-28 lead.

Buffalo had one last chance, and they took advantage with a 14 play 64 yard drive. The Bulls converted 4th and 1 twice culminating in a 4 yard pass from Taylor to Gasparre for the go ahead touchdown. Gasparre finished with 8 receptions for 129 yards, with that last touchdown, Gasparre tied Doc Smith and Chris D'Amico for most receving touchdowns in UB history (now T2nd). UB lead 35-31, leaving only 1 minute on the clock. Barring disaster, UB would surely win. Disaster almost struck on the ensuing kickoff. Maine returned the kick to the Buffalo 48 where he was pushed out of bounds by the last man to beat, Kicker Gerald Carlson. Maine drove to the 4 yard line with one second left. On the final play, Maine threw a slant pass to Rameek Wright. UB had no answer for Wright who had 17 catches and 173 yards on the day. Wright was open at the 2, but just as the ball reached him, he slipped, dropped the ball and the game was over.

Mark Taylor followed his career high game against New Haven with another great performance. Taylor only had 5 200+ yard games in his career, but in back to back games he threw for 720 yards, 23% of his career yardage came in the last two games of '96. Against Maine, Taylor threw for 309 yards and 3 touchdowns.

After the Maine win, UB was voted twenty-fifth in the division 1-AA top 25 poll. They did not get an invite to the D-1AA playoffs but finished twenty-seventh in the final poll.

The quality of this team seems to be understated; everyone assumed this was the result of 10 years of preparation, and that the Bulls would continue to trend upward. Unfortunately, it would take 12 years for the Bulls to post another winning season. In the next 4 years, UB would win 8 games total. This team wasn't the result of the previous 5 years, and they were not the foundation for the next 5 years. The 1996 team was more rare, the team saw they had a small window of opportunity, got on a run, and never stopped running downhill until they finished 8-3 and as one of the greatest teams in UB history.