Share All sharing options for: 99 for 99 - #89: Drew Haddad Rewrites the Record Books, is Drafted by the Bills

After a strong effort at Virginia, the 0-10 UB Bulls had one last chance to get a win in their inaugural season of D-1A play. For Senior Drew Haddad, it would be his final game as a Bull. Haddad entered the game with 75 catches which broke his record of 67 set in '97 and matched in '98. He also tied his own record from '97 with 1058 receiving yards and the Virginia game was his 7th game of the season with 100 yards receiving.

Up against Miami of Ohio, UB was crushed 43-0, but Drew Haddad shined, finishing an amazing season and a legendary career. Drew caught 10 passes for 100 yards. He had at least one reception in each of his final 36 games. He left UB with: 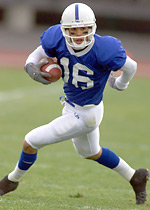 The most career receptions: 85 - That record stood for 9 years, and he currently has the 2nd, 4th and 5th most receptions in a season in UB history.

The most receiving yards in a season: 1,158 - That record also stood for 9 years, and he currently has the 2nd, 3rd and 8th best seasons for UB in receiving yards.

The most career receptions: 248 - The record stood for 10 years, he is currently2nd.

The most career receiving yards: 3,409 - The record also stood for 10 years, he is currently 2nd.

The most punt return yards in a career: 787 - The record is 13 years old and still stands today.

Drew Haddad was selected in the 7th round, pick 233 by the Buffalo Bills in the 2000 NFL Draft. He was the second Bull to be drafted by the Bills, and the first in the NFL era. (The first Bull drafted was Willie Evans when Buffalo was in the AFL.) After spending the 2000 season on the Bills practice squad, Haddad was released and picked up by the Indianapolis colts in 2001 but suffered an injury. 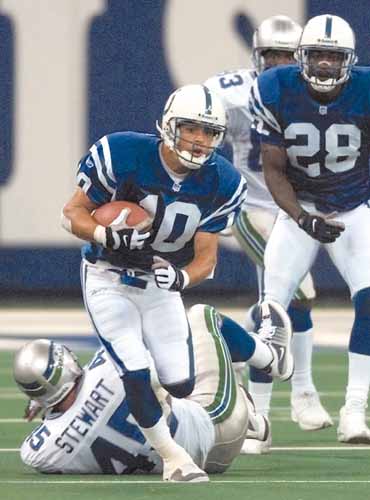 Haddad got his first and only real NFL action when the Colts hosted the Tennessee Titans in 2002. Haddad returned 2 kickoffs and recorded the sole reception of his NFL career; an 11 yard reception from Peyton Manning.

In 2004, Haddad played for the Frankfurt Galaxy, scoring a touchdown in World Bowl XII in a losing effort against the Berlin Thunder.

In 2007 Haddad was inducted into the UB Athletic hall of fame.