Last week Conrad told us all Why he would script the spring game so its entertaining. I've also mentioned countless times my dislike of playing FCS teams (save maybe the SUNY schools). Well, if the stars line up right both Conrad and I could be very happy. Why?

Huskie Wire | Doeren uninterested in spring scrimmages with other teams
An Associated Press report quoted AFCA president and Harvard coach Tim Murphy as saying it would be practical to have teams run through drills together. Murphy added that teams may also scrimmage against one another. When the AFCA board meets next month in Arizona, it may propose an NCAA rule change that would allow schools to scrimmage or practice against each other during the spring.

Some Coaches, like Bill Doeren of NIU, are not too keen on cross team scrimmages. Those objections have to do mostly with scheduling agreements, travel, and expense.

There is something to that. No coach wants to bus his team to another school for a scrimmage and few FBS teams would be willing to do so without a big fat check or a return date.

But what about FCS teams? If a team plays their cards right they can find a willing FCS team who, for a fraction of the cost associated with a regular season game will travel to play a meaningful(ish) spring game. Obviously this works best for teams who are very close to an FCS team (Think Delaware and Temple), UConn and Central Connecticut, Boston College and UMass (whoops)...

But even in Buffalo's case there are two very good options. Cornell, Colgate, Marist, and Albany are all teams that could bus in the morning, be at UB inside of six hours, take two more to warm up, then play a game. Stony Brook, Fordham, and Columbia are all a bit further out but they might be an option as well.

The benefits for both teams will be game situation experience. One could argue that you want your first team offense to practice against a first team FBS defense but that happens all spring.

Just something to consider... What do you guys think? 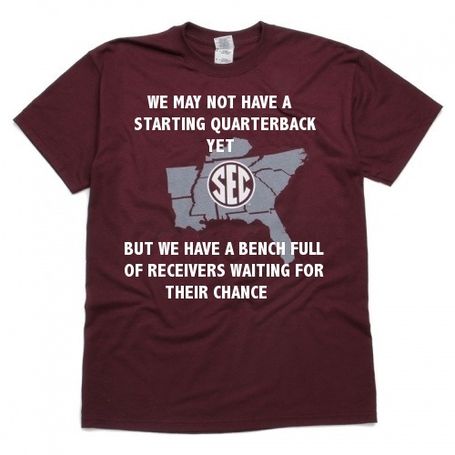 New Texas A&M T-Shirt Ideas - Cowboys Ride For Free
In case you missed it, a Texas A&M store printed some sweet t-shirts (as seen above) that fit somewhere between the categories of "Please Accept Us?" and "Graduating High School Is Overrated." Apparently the Aggie business owner (that phrase alone is enough to send the economy back into a downward spiral) who designed the shirt thought that the state of North Carolina was SEC country and deserved a spot on the shirt. He also happened to leave out the state of Missouri and oh yeah, Texas.

I loath the Big 12 almost as much as the SEC, and I don't care a wit for Oklahoma State but.... This is pure awesomness!

Thank you Cowboy fans for this...

Time to crap or get off the pot!

MOUNT USA Not Doomed - From Our Editors - SBNation.com
"We're looking at alternatives on how to actually form a new conference arrangement," Smatresk said. "We've looked at several different configurations and will decide on what is best for all our members. We're proceeding, and nothing has come apart."

Really? this is still going on! Just pick a direction and go! You do know you can merge and change the divisions later... Heck we in the MAC have changed divisions twice since March!

I Completely agree with this

Yes I think 40-60 is way too low when your stars beaically say its part of the culture. I'm thinking 70-85 percent.

Postseason ban upheld for UT men's basketball - Toledo Blade
Additional penalties include a reduction of practice time by one day and four hours per week and a loss of three regular-season games -- two of which were expected to be at home. Per its policy, the Mid-American Conference is following the NCAA's lead and barring UT from participating in the league tournament.

Oh now we have the pleasure of uneven football divisions *and* an uneven number of teams in the MAC Basketball tournament. My guess is the #5 team gets a bye to Cleveland and six though eleven play campus games.