Buffalo Offers Kyle Yocum a Quarterback out of Reading Pennsylvania

Share All sharing options for: Buffalo Offers Kyle Yocum a Quarterback out of Reading Pennsylvania 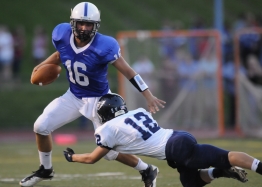 Buffalo has offered a scholarship to Kyle Yocum a Quarterback out of Reading Pennsylvania. The offer is noted on scout (though they lack a profile for him) and on 247 sports which lists his only other offer as being from Bucknell.

While just a sophomore Yocum was chosen as All County honorable mention.

The Senior is now a returning three time Berks all-Academic pick and is coming off of an impressive junior campaign. In his third year as a starter The Exeter Township Eagles Quarback completed 65 of 145 passes for 1,198 yards and 13 touchdowns. He also carried 175 times for 844 yards and 11 scores.

247 sports ranks Yocum as the No. 28 recruit in Pennsylvania (PA) and is the No. 41 Pro-Style Quarterback in the nation. He was invited back to Boston College for a return visit for the Eagles spring game. and is also setting up visits to Illinois, N.C. State and Rutgers.

Yocum and all known Buffalo offers, can be seen on the Bull Run targets page (here)