Over the course of four years Mitchell Watt has made himself a fan favorite at Buffalo. Long before any of us known just what obstacles he had to overcome the man known by UB fans as "sWatt" had made his mark on Buffalo fans. In all that time his parents have never seen him play in person.

That changed when the Bulls went into Akron. Of course, the first game his parents showed up at was the one road game where Watt forgot to bring his Jersey. Mitch, wearing 44, didn't let a new number slow him down. Watt put up 22 points and was instrumental in tipping the balance in Buffalo's favor.

Both teams got out to a slow start before their offense kicked in. Eventually Akron, despite some foul trouble, built up a four point lead. But the Bulls, behind solid play by Watt (22 points), McCrea (13 points), and Barnett (8 rebounds) put buffalo on top by seven.

Akron clawed back into the game, even taking a one point lead. UB took advantage of Akron foul troubles and key turnovers to keep end the Zips run and retake the lead. Akron who was led by Alex Abreu with 18 just could not overcome some tough calls and poor decisions.

When Zeke Marshall fouled out late in the game the last of the energy holding the Zips in the game seemed to dissipate.

Point 1) A great commentary on the perception of Coach Witherspoon and timeouts.

Just look at the game thread around the eight and a half minute mark when Akron started to make a run. Akron score four straight and had pulled to within three... Then a timeout! The fan reaction? 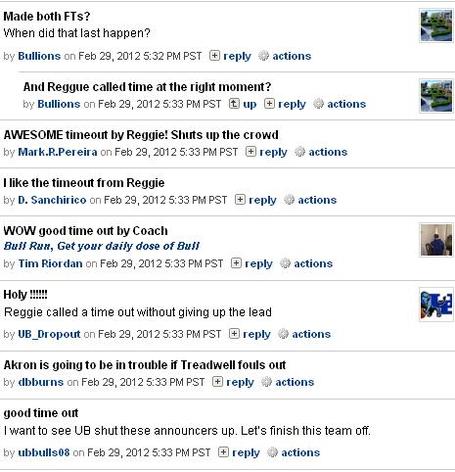 Maybe not enough to swing the game one way or the other but they seemed to be calling the game by a different set of rules at different times. Akron seemed to get into foul trouble early, then UB would have a quick explosion to catch up.

Ultimately it may have hurt the Zips more because their big names were in more trouble than Watt and McCrea.

Point Three) Thank you Kent! may I have another?

While Buffalo was playing Akron there was more action just down the road at Kent. The flashes took out Ohio. This, along with UB's win, puts the Bulls all alone in second place one game Ahead of Ohio.

All UB needs to do for a bye is to beat up on Bowling Green this Saturday. The Bull do, however, still have a shot at the MAC regular season title. All UB needs to do it to win and then have Kent take down the Zips. If that happens the worst UB does this post season is an NIT bid.