Ready for the Blizzard in Buffalo?

Ready for the Blizzard in Buffalo?

Share All sharing options for: Ready for the Blizzard in Buffalo?

Stock up on Fluids.

Jimmy Griffin famously told Buffalo Residents to wait out the Blizzard of 85 "With a Six Pack". This two Day Blizzard should require just four drinks.

Goldschlager.: For Canisius, pretty self explanatory. A crappy tasting drink infused with flecks of Gold to make it seem worthwhile.

Princess Mary's Pride, on the rocks: this one is for the ladies, and for Slippery Rock. You may want to be called "The Pride" now but to me you will always be "The Rock"

John Daly: lemonade, iced tea and vodka. John Carroll has just one player on offense and an ok goalie. Their drink has just one item with a punch and then some stuff typically reserved for my kids lunch.

Electric Smurf: A complex Blue Drink that always satisfies, much like UB Hockey!

Stock up on Nutrition:

It's Buffalo, Pizza and Wings all around!

You'll be spending a lot of time at the Northtowns Center so dress warm kids, we don't want you catching cold during the exam season.

Throw caution to the wind and wear your blue and white, you may freeze your read end off but at least you'll heart and soul will be kept warm by those around you.

Or, if you are really cold just roam around looking for some source of heat to get you through the weekend...

Hmmm what to do. 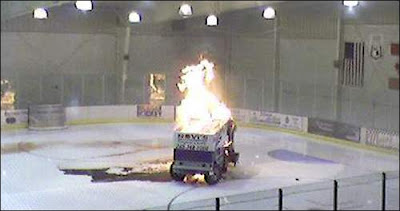 Let authorities know if there is anyone in your house / dorm with special needs.

If there is anyone in your house, or dorm matching this description please let them know that the game is free for students, then drag them there!

There is a club in the NorthTowns center where the gents from WRUB and some players get together after games. Be sure to meet up with people there. It's sorta safe...

Listen to the radio or TV to keep informed of changing conditions.

WRUB will be broadcasting live and if you are loaded you can buy the video stream from fasthockey.

The teams coming in are:

Canisius is an independent squad which is ranked number 37 in the USHSHO computer polls for the ACHA.

They have four players with more than 20 points on the year (Austin Casselberry, Reid Zaccagnino, Brian Seniw, and Pat Hurtubise) and a quartet of respectable goal tenders.

Despite their ranking the Griffs could be a sleeper.

John Carroll, of the CHMA is ranked 30th in the ACHA human polls (28th in the computer polls) and sits at third in their league.

They are led by Dan Potter who is averaging about one goal nad one assist per game.

His 31 points is the 12th most in division one. Justin Camuto is a serviceable netminder who is giving up about three and a half goals a game.

Slippery Rock is ranked 47th of 55 in the USHSHO computer polls. They Open up with Buffalo, the highest ranked team in the tournament so they have an uphill battle.

They are a powerful offense team that, lacks in goal tending.

JT Grah third in the league in scoring with 43 points. Mavrik Goepfert has 33 points and three other players have over 20.