How do you beat a Power Ranger? With a MEGAZORDICH.

11 factors to decide the game.

Toledo does everything well. They throw well and they run well. I would not say that they excel at either facet, but their balance makes them deadly.

Fluellen coming home, expect to see him get the ball often and expect him to try to show off in front of his family and friends.

Being home might cause Fluellen to lose focus; Buffalo should try to force the fumble when Fluellen touches the ball. We need takeaways to be competitive. Toledo can beat you quickly: they have eleven 40+ yard plays and another fifteen plays between 20-40 yards. UB has not been good against the big play, their only hope is that the inclement weather slows the game down and allows UB to key on the run game and the weaknesses of Toledo's offensive line.

Toledo's Mascot, Victor E. Rocket Rocky the Rocket, is a football incarnation of the Blue Power Ranger. Our Quarterback is Mega Zordich. Obviously a Zord is superior to a single ranger. Let's analyze why: 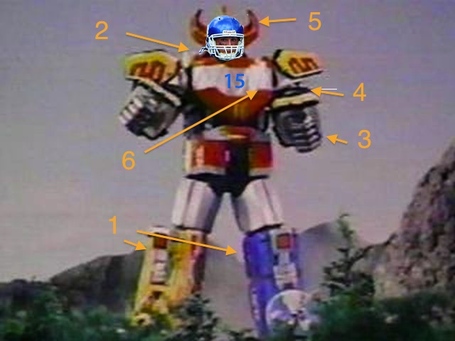 1) Heavy metal legs: great for leading the team in rushing, not so great for throwing mechanics.

2) The long hair: Whether man, or half man/half Zord, chicks dig the hair.

3) Robot Grip: Zordich protects the football; rarely fumbles considering how many touches he has each game.

4) Robot Arms: Equally capable of planting defenders with stiff arms, and launching the long ball. On the downside, balls may sail too high.

5) Robot Horns: As they say, mess with the Bull, you get the horns.

6) Heart of Champion: Even when the play is less than stellar, you cannot question the heart of MEGAZORDICH. While 100% human, it is bigger than your heart, and never gives up.

An inter-dimensional being trapped in a time warp, he is the wise mentor of the Rangers, who also bestowed their powers. He once had a corporeal human form, but now appears as a floating head in an energy tube.

Replace "floating head" with "head of communications" and "energy tube" with "Twitter" and yep that's him.

Toledo is not great defensively, so they play high risk, high reward defense, and they are +7, with 12 interceptions in 8 games. On average, they intercept 1 out of every 25 passes thrown. They have returned 4 of their interceptions for touchdowns.

Zordich has thrown interceptions in critical situations, usually trying too hard to get into the end zone, this plays into Toledo's strength. UB needs to be patient and exploit the Toldeo front line with the run, even if they find themselves down by two scores. Toledo does not have great endurance or depth for the fourth quarter. Buffalo needs to continuously hammer at the Toledo defensive line.

Bernard Reedy: #1 is another special MAC athlete who does a lot of damage on special teams. He is averaging 14 yards per punt return and has one punt return touchdown. On kick returns, Reedy averages 28 yards per return and has two touchdowns. In a mucky game, a big play on special teams might be the deciding factor. Oh and Reedy is no slouch catching the ball either, he has 57 receptions for 738 yards and 5 touchdowns...he'll enjoy Buffalo's soft cushions.

For the second week in a row UB will only go as far as the running game will take them. Who will run the ball? Take your pick between Branden Oliver, Alex Zordich, Brandon Murie and Devin Campbell. UB is utilizing the west coast offense to help Zordich get the ball out of his hands quickly. This should help Zordich's completion percentage but it prevents Buffalo from stretching the field, brings men into the box and stifles the running the game. Toledo allows 5.28 yards per attempt on the ground; Buffalo will need every inch of that to win.

Toledo: Picture of David Fluellen, from the Buffalo News

Advantage: Toledo, because you know you are bad when the hometown news focuses entirely on the other team.

If Buffalo brings defensive pressure they can get in the heads of the Toledo offensive line. That line has allowed 15 sacks in eight games and have committed:

If the Buffalo crowd gets into the game vocally, look for Toledo's line to struggle at the line as they have also committed:

If Buffalo plays tough and refuses to back down, UB can exploit Toledo's aggression, they have committed:

If you exclude the Morgan State game, Buffalo has scored 87 points all season. Toledo has scored 97 points this year...in the third quarter alone!

Toledo tends to take a lead into the half, and then they let the game open up. They tend to tire first, as they have been outscored in the fourth quarter this season, however for seven straight games, the lead they establish in the third quarter has been good enough to guarantee a Toledo win.

Advantage: Toledo. UB has not won a second half all year, including the game against FCS Morgan State.

Jeff Quinn is 6,303 days older than Matt Campbell. To put that in perspective, WR Fred Lee is only 8,079 days old.

11) Game Score brought to you by: Science

Buffalo is where MACtion comes to die. Bad weather is expected tomorrow, so I'm going to cut the anticipated score in half.

It will be close for a bit, but Toledo will pull away comfortably.