'08 Starks vs '11 Oliver: A Statistical Analysis

Share All sharing options for: '08 Starks vs '11 Oliver: A Statistical Analysis

I was under the impression that everyone loved BO, the bright spot in our otherwise dark season. BO finished as the #13 running back in the nation, in 12 games, 2nd in the MAC to Bernard Pierce. With graduation and the NFL draft, 5 of the top 13 backs will not return, so theoretically, we will have the nation's #8 back next year and the #1 back in the MAC.

However I learned Bull Run Nation is split on BO, many believing his numbers were inflated by cupcake opponents, and his massive 306 carries. The Gold standard of Buffalo running backs, before this year, was James Starks and his performance during the championship year of 2008. That year, Starks not only finished #17 in the nation, he did so in dramatic fashion; breaking off long runs and ending OT games with flair.

So how do BO '11 and Starks '08 compare. In my analysis, I looked at the yards per carry of each back to remove inflated numbers based on increased carries. I then found the average yards per carry allowed for the (non QB) feature back of each team BO and Starks faced.

The results after the jump. 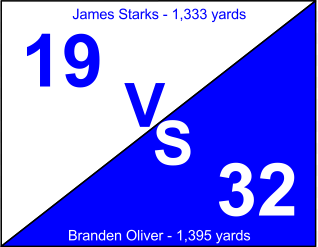 1) Number of times the running back exceeded their opponents YPC

Durability:
Starks missed 2 games due to injury (Missouri, Army).
BO missed no games and was 7th in the nation in number of carries.

Overall both backs put up big numbers but did not consistently outperform the average of the defense's they faced. Starks had better numbers, but the defenses he faced were not as adept at stoping the run. In 2008, many of our opponents faced Donald Brown (2083 yards), MiQuale Lewis (1736 yards), and Shady McCoy (1488 yards), and those backs put up bigger numbers than Starks.

The big components in favor of BO, was our record when BO exceeded the YPC allowed by opponents, and BO slightly outperformed Starks in "Big Games."

You could argue that the biggest X-factor is a championship. Starks delivered one, and that for some fans, could pull Starks even or ahead of BO for best Rushing season. However looking at yards per carry vs the average YPC of their opponents, BO in my interpretation put in a better season.