For anyone who was not paying attention back then Turner Gill's 2008 turnaround at Buffalo earned him an interview with Auburn. Many thought that just one winning season in the MAC made him a long shot to get the job. Yet others, most famously Charles Barkley, jumped on the the Gill Bandwagon with Blinding Speed.

When Gill did not get the job there were cries of racism. This despite the fact that the job went to someone with  roots as an Auburn coordinator and had coached, albeit not very successfully, at the AQ level. The lines were drawn, camp's lined up articles were fired off, and for several weeks any real news disappeared into a vacuum of media sensationalism.

I still contend that Gill's experience was not racism as evidenced by the fact the guy chosen just won a national championship. But in the defense of all those who thought that Turner was held back because of his race, or that of his wife, at least Gill did not get the job before some started screaming Racism.

Mike Haywood cant even make that claim yet he is trying to play the race card in his firing.

Pitt Football And Mike Haywood: The Ugly Issue Of Race - Cardiac Hill
A representative from the Pennsylvania Human Relations Commission, an entity with which Mike Haywood has filled out an application for a complaint, thinks said complaint is based at least in part on skin color:

Gill, despite being slighted for whatever reason by Auburn, kept his head up and stayed above the fray. Thats because Gill is a class act! If you are respected and loved others will defend you when you need it most. If you are seeking attention you'll run out there to defend yourself.

So mike Haywood's case is that Pitt hired, then fired him because of his race?

Look I'll be the second to say I have no clue what went on with his firing (Cardiac Hill was the first). Maybe Pitt should have let the drama surrounding the domestic abuse allegations against Haywood play out. It certainly seems that they were slightly overblown.

But it took months for the charges to clear and in that time someone needed to salvage the recruiting class, build a staff, and start to plan for 2011.

Some argue that the Haywoiod hiring was a mistake in the first place. Don't get me wrong I think he is a great coach but just like Gill this is a guy with *one* winning season in the MAC. Gill's 2008 resume was more impressive than Haywood's 2010 portfolio and he (Gill) did not get a job until the following year.

But it gets even better! The 'evidance' provided is that Todd Graham is making more than Haywood did. Lets compare..

Which Coach to you hire? And who commands a higher salary?

I was somewhat sympathetic to Haywood when the charges turned out to be a whole lot less than they were initially thought to be. Here is a guy who landed a great job, his dream job then he lost it.

But the claims of racism are not only silly on their face but they may do more harm to Haywood's long term coaching career than the charges which coast him the Pitt job. If you were an Athletic Director would you interview a man who can get the job and *still* call you a racist?

Don't Worry Terrell there is always the UFL or Area Ball! 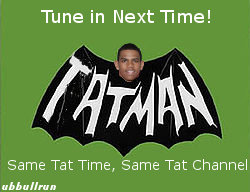 For those of you who don't beleive in a Just God I give you Terrell Pryor!

Yes! Pryor who first seemed to get just a four game suspension, missing only their out of conference schedule, was one of the first to jump ship altogether when Jim Tressell was fir... erm Resigned at OSU.

The thinking was supplemental draft. Some team, somewhere, would take a chance on Pryor. He might not be an NFL callibar Quarterback but his athletic talents make him dangerous at several positions.

Then in a "And Stay down" moment:

I can only hope this holds up!

Now the really important part of the NFL lockout ending!

Still only one Bull taken as an UDFA. We are still waiting to hear on Davonte Shannon and some folks think Thermilus will get a crack somewhere. Here is the full list!

MAC Players Signed By NFL Teams As UDFAs: A (Mostly) Complete List - Hustle Belt
This just makes it easy to remember where he signed. Keep it in the same town. I'm still waiting for Brandon Thermilus and Davonte Shannon to get with teams. The former has NFL talent; the latter has vaulable accomplishments and experience.

No its not the B10 network, but its a start!

MAC, XOS Digital Establish MAC Digital Network > MAC > News
For the first time, MAC fans will have access to an extensive digital library of exclusive MAC sports content available anytime, anywhere, on a number of different devices. Upon launch, the MAC Digital Network will provide its fans and alumni from all 14 Conference schools with original produced programming and studio shows.

Buffalo News with a bit of coverage:

Dismuke, Long out at UB - Campus Watch - The Buffalo News
"It’s very disappointing,’’ UB coach Jeff Quinn said. "To have someone out there all spring and to put a lot of time and effort and then to turn around and not fulfill his responsibilities academically is very disappointing but it provides opportunities for someone else.’’