This is one of four brackets in a summer long feature on the history of UB Athletics. First all the the candidates will be introduced and ranked. After the entire bracket is assembled a series of polls will help us pick the best teams to ever represent UB.

Some Last minute lobbying by "Bull of all Bulls" brings the 1986 Bulls to the table. The field is now set and here is Football game one. The now famous Bulls of 1958 versus the 1948 Bulls of frank Clair. 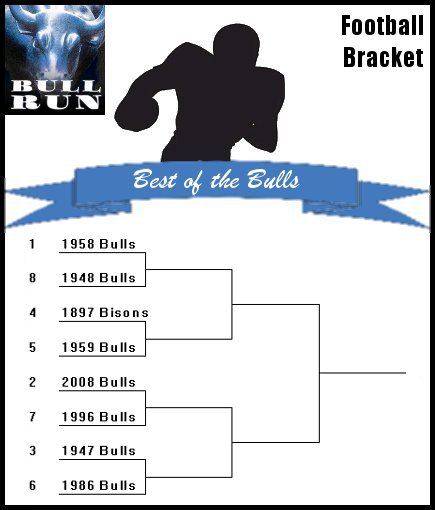 The 1958 Bulls were quietly being forgotten by modern football fans until the 2008 Bulls Received just the second bowl invite in team history.

They knocked off Harvard back when that meant something and broke down barriers as the teams players got the community going. The Bulls won the Lambart Cup, emblematic of supremacy in Eastern U.S. small-college football. That led to the team's first bowl invitation, to the Tangerine Bowl in Orlando, Florida against Florida State University.

In what has become a well known story the team refused to leave its African American players behind, even when they were told it would mean that nobody would go.

UB's only loss of the season was the opener, a road game at Colgate. They fought Niagara to a tie and destroyed everyone else. Aside from the Colgate and Niagara games UB outscored their opponents 37-10 on the season.

1947 was Frank Clair's first season as Jim Peele's handpicked successor at Buffalo. It was a promising season and what seemed to be signs of an established program. 1947 was Buffalo's fourth straight winning season and Clair was a rather young man with a promising future in Buffalo.

Unfortunately the CFL had other things in mind as the snatched Clair away from Buffalo and helped him to become a legend north of the border.