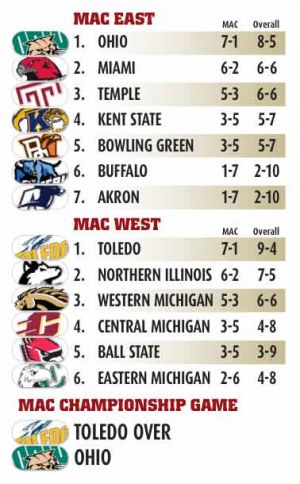 If you look to the left you will see Athlon's predictions for the MAC this season. It's hard to argue too much with the order (I might swap NIU/Toledo and Temple/Miami) but look at the numbers...

Yesterday I linked to Phil Steele's prediction that Ohio and NIU will go 11-1, and that's a pretty attainable goal for these programs assuming they dont give one away in conference.

Not Ahlon has Ohio going 7-1 in the MAC and thats a fair guess. After all every MAC team has the potential to give one away. But look at OU's overall record. 8-5.

Thats right Athlon has OU losing every out of conference game except Gardner-Webb. Man they must have a world beater of a non conference schedule. Let's see.

Really Athlon? I can maybe see two losses of the four. Marshall beat OU last season when OU was the better team and the Herd always get up for the Bobcat's.

And Playing in New Mexico will challenge the Ohio with altitude and temperature but those will be the biggest challenges. Heck I would even think the Bobcats might be able to make a run at Rutgers thought it would be a pretty big upset.

To lose one of these would be a suprise to lose both would mean OU is not the best team in the MAC East.

This is why you must be careful who you read if your team is a mid major. I would almost bet whoever barfed up this prediction did not even look at OU's schedule.

To their credit they picked Buffalo where most people are:

Athlon's 2011 MAC Predictions | AthlonSports
Buffalo is a team in transition searching for a new identity under second-year coach Jeff Quinn. With few offensive playmakers, the Bulls will likely endure another long season. Akron will be better in Rob Ianello’s second season, but the Zips are a few recruiting classes away from becoming a factor.

Buffalo | AthlonSports
If Quinn keeps up his early pace of recruiting, he’ll have quite a collection of talent in Buffalo before long. His recent signing class may be the best in school history. So the future looks bright. The present, however, isn’t looking so good. Buffalo will be better, but it’s tough to envision this club making too big of a leap in the MAC East standings. The Nov. 19 home game vs. Akron could be a showdown to see which team escapes last place.

But then they went and ignroe Steven Means or Khalil Mack on the all conference team, not even second team. One of both of these guys shoudl have been on the list.

Athlon's 2011 All-MAC Team | AthlonSports
Athlon continues our countdown to the upcoming season with our first and second All-MAC teams for the 2011 season.

Around college sports there are some predictions about football expansion in the times:

25 College Football Teams to Launch Next 4 Years - NYTimes.com
The National Football Foundation released the details Wednesday, noting that a total of 25 programs will start up over the next four years.

And more noise about how players are not compensated enough, this time from a coach who wants to cut about 280 division one basketball teams out of the show..

Calipari’s plan to pay players living expenses: secede from NCAA - The Dagger - NCAAB Blog - Yahoo! Sports
Asked about that flaw in his system after he unveiled his proposal, Calipari acknowledged the plan wasn't perfect but reiterated it was the only way he could envision universities generating enough money to increase the living expenses it pays athletes in every sport.

Tell you what Coach, lets have Kentucky go for a good long while actually following the rules before you gripe that they are keeping you down, ok.