UMass to the MAC got Pierced..

Share All sharing options for: UMass to the MAC got Pierced.. 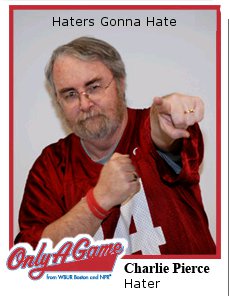 I've found the first thing that I am going to really hate about the UMass move to the Mid American Conference. Its not the question of divisions and its not having a second partial member.Those are minor annoyances, perhaps worth the benefit of an eastward reach and a good name on UB's schedule.

No, the thing I am really going to hate is the fact I have to read Charles Pierce from boston.com. I had a few UMass fans warn me about the Boston media but this 'piece' is the first experience I have really had with them.

Sometimes a person really likes to relieve themselves in their neighbors pools, just be thankful you dont swim next door to Charles Pierce. Because I'm pretty sure that he would make use of your pool.

The subject of my ire,  "We are not Alabama", is nothing but a page long rant about the minutemen deciding to move up to the football bowl subdivision. It's the first negative press review I have seen. As the first guy in he could have easily made his points without coming off as a tool, but sometimes you have to be true to yourself.

Big-time college football is an ethical and fiscal millstone around the necks of the institutions that choose to participate in it. The only thing that makes a difference is how well the institution can swim.

Righhhht Because universities *never* throw away money or have ethical problems in other schools. But putting aside the foolish implication that athletics is the sole, or even the biggest, 'waste' of money on college campuses what does this tell us?

His first, and presumably biggest objection is that he believes "Big-Time" college football wrecks the finances and educational opportunities of a university. Try to remember this because he is going to spend the rest of his article trying to compare a school in the MAC and their budget to a school in the Big East and their budget.

Recently, the University of Massachusetts attached this millstone firmly around its own neck and jumped into the pool. Not the deep end, surely. It joined the Football Bowl Subdivision by joining the Mid-American Conference. UMass vs. Akron! Throw out the record books when those traditional rivals tee it up!

Ok so the Mid American conference is not 'big-time' enough for you. But wait! I though those big time programs were ethical millstones around the necks of their universities? So I guess you're relieved that UMass got it's feet wet in the Bowl Subdivision by joining a conference in which schools are not identified as 'football schools' with bank breaking budgets or a history of bending rules.

Oh! I get it, you're being sarcastic about UMass and Akron, you almost slipped that by me.

So you think that the big time schools are nothing but problems waiting to happen but mid majors are too small for you? Is there something in the middle I am unaware of?

Of course, Bob Kraft, the world's only completely altruistic sports owner, volunteered to have a few more paydays at his stadium down there on Rte. 1, a mere 67 miles from the students on whose behalf, of course, this particular money grab is being made.

Unless you're writing for free you can hop off that high horse to collect your pay check.

It's very common to kick around the rich. Sometimes they deserve it and sometimes they don't. But the mere fact that Kraft will be making some money does not take away from the fact that were it not for his putting Gilette up for use UMass could not have made this work.

I also suspect that UMass is going to get a far better deal than some schools that rent NFL Stadiums, like Temple.

Here's a Pro Tip, guys -- the primary destinations for college football are places like Tuscaloosa, Knoxville, Ann Arbor, and South Bend. Why?  Because that's where the schools are, foofs. If your grand strategy requires busing your fan base an hour-and-change for every home game, then your grand strategy needs a lot of work. And gasoline money.

There is so much wrong with this I urge you to Take a second look. Few things in life are as fun to watch as someone who is clueless bing blissfully cocky in their ignorance. Ok got that train wreck of a though soaked in? lets dissect it.

Well, current students are only part of the equation. The big time schools the ones you simultaneously loath and envy rely heavily on Alumni support that comes no matter where they play. Mid Majors need to play a bit closer to their Alumni Base, they are the ones who pay for tickets, and donate money. Tell me, Where do most UMass Alumni live? With 250K throughout the commonwealth I'd bet a fair share are in Boston.

Was there a demonstrable demand for this, or is this just a matter of some UMass panjandrums and their longing looks south towards Storrs, Connecticut, and their coveting UConn's ability to lose just south of $2 million by getting drilled in last year's Fiesta Bowl. You can't be a world-class university without having the ability to light a couple of million bucks on fire on behalf of your football team.

See that ladies and Gentlemen? That there is one world class shark jump by Mr Pierce: 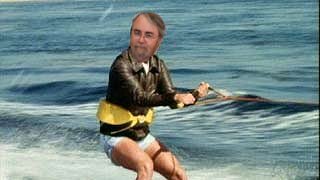 So far the admittedly narrow reception I have seen from UMass alums and students has been pretty postitive. Yes some are pretty ticked about the free bus trips to Gilette but that is only going to happen while UMass raises money (by playing at Gilette) to do upgrade to their current stadium.

I also like the way he cherry picks the fiesta Bowl as an example of 'all bowls'. Let's be clear, the odds of a MAC team going to a BCS bowl anytime in the next few years is near zero. The BCS Bowls screw universities by requiring they buy a huge number of very expensive, and poorly placed tickets.

Buffalo made money on it's last Bowl, I believe Temple also made money on their 2009 bowl. Mid Majors tend to lose or make a little per bowl game and the MAC has a history of being sure to send their schools to the nearest tie in.

But if you want to try to use UConn as a measure here are some numbers. Eleven Million in Ticket Sales, Nine Million in NCAA distributions, two million in television rights. Get the idea? UConn lost a lot of money on one Bowl game but does fine year after year and gmae after game. Are we to compare the UMass Bowl picture to UConn but ignore the other finances?

In the UConn's bowl situation and budget is irrelevant. The MAC spends less per school than any other Bowl Subdivision conference. They get away with it becuse the conference has pretty favorable geography and because most of the schools will not go into the red for their athletics.

And then, of course, from the above link, there's this, from an allegedly responsible adult in the UConn administration:

"Long term, this is not a story that can be summarized on a spreadsheet."

Not a small spreadsheet, in any case. Expect to see similarly lame alibis surfacing in the arboreal regions of Massachusetts over the next few years, as the Minutemen fight their way to bids in the GoDaddy.com bowl, one of the MAC's prestigious postseason partners.  Bigtime college football is a marvelous environment for utter public hogwash. Make no mistake -- everything you have heard about the alleged financial benefits of this move either to the school or to the Commonwealth is either a lie, or the product of magical thinking. There's no third alternative.

Again will you please make up your mind? Do you want UMass to lose two million on the Fiesta Bowl or  break even on a lower profile bowl. By the way, the full bowl name is  "the tostitos fiesta bowl" Nothing screams high class like Tostitos.

Were you so hard up against a deadline that you decided to whine about the first piece of news that came across your desk? You sound like my pre-schooler. Sometime she get's tired and cranky before something sets her off. She never knows quite why she is upset but she can start making up reasons with the best of them? Is Boston.com hiring?

As far as making money? You're right chances are UMass won't make a ton of money with the move, they might be a bit better off or a bit worse off but this is not a financial game changer for the institution. Do the arts at UMass make money? Do any student activities outside of the class room make money?

Athletics helps unite a campus and like it or not they are a part of our American Culture. It's no more a waste of money to run a football team than a symphony band.

And This Blog will make y'all a small symbolic wager -- after the Minutemen spend a couple of seasons drawing 17,000 people to Foxboro to see them tussle with Kent State and Toledo, we will hear that they "cannot compete" in the MAC without a bigger stadium in Amherst because, gollywillikers, we can't expect the students there to drive almost 100 whole miles to see a home game. And the second stage of the con -- a publicly financed new stadium out on the campus -- will be unveiled.

Split that wager into two parts and I will take you up on it.

The first part is a cowards bet. UMass has already said that they plan on improving their on campus stadium to meet FBS requirements. So whats the bet? That they will have a bigger stadium or a new stadium?

If you are sticking to 'new stadium" I will take you up on your wager. UMass will overhaul its existing faculties to increase seating a bit and maybe add some offices/training rooms. They will not build a new stadium or even ask for one after "a couple of seasons drawing 17,000 people to Foxboro to see them tussle with Kent State and Toledo"

Buffalo is using the stadium built for the 1994 world university games. Temple is renting an NFL Stadium, Ohio and Ball State have recently renovated very old existing stadiums. The only 'new' stadium in the MAC is at Akron, because there was no on capus stadium to improve.

The Mid American Conference is not perfect but they are not fools when it comes to money. There are no stadium wars, salary wars, or cut throat competition between members. It's not small time football but it also does not foster an atmosphere where winning at any cost is more important that the academic missions of its universities.