Share All sharing options for: Dividing the New MAC....

With UMass evening out the MAC somehow 14 football teams and 12 Basketball teams need to live together. It's time to start talking divisions.

The only conceivable way to ensure that the football and basketball divisions are the same is to separate the two football only, and two easternmost, members. This is not going to happen for two reasons. First is that Temple and UMass are natural rivals coming from the A-10 the MAC is going to want to keep both happy because, well, we would like them to stay awhile. Secondly the worst thing you could do Geography is separate these two teams.. UMass has two (UB, Temple), maybe four (UB, Temple, Akron, Kent) schools that are realistically bus trips means.

If you're wondering just how far you might be from some of the other MAC Schools here is the new distance grid (driving in the states only):

Because Temple and UMass will be in the same division it's most productive to talk only about football.

The following are the four most common ideas that fans are bantering about.

Try to keep the current East-West layout as unscathed as possible:

Bowling Green get's punted back to the West so that their annual game against Toledo does not burn the only cross over game they get. 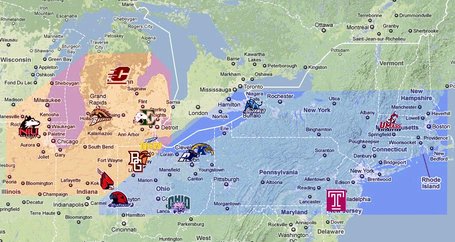 Bowling Green trades trips to Temple and Buffalo for NIU and Ball State shrinking their average commute by 115 miles. Everyone in the West get's another bus trip game, most of the teams in the east trade a bus trip to Bowling Green for either a flight or a long bus trip to Amherst Massachusetts.

This is the lease likely scenario but it's worth mentioning:

The MAC (North) is no longer a bus league stripping one of the conference strengths (low travel cost) from seven of the schools.

The MAC (South) is, for the most part, an All Ohio League with BSU tagging along. Very nice geography but no way NIU or Temple/UMass will be too happy about this layout. 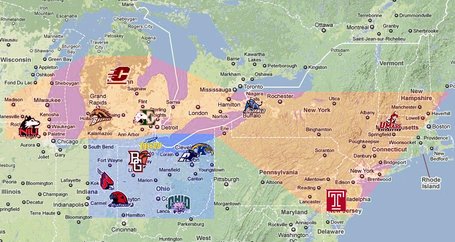 Northern Illinois has an average trip of more than 450 miles. Only three of six conference mates would be drivable. When Buffalo made the trip out to DeKalb this past season the team flew.

Scenario #3: The Old versus the New

Try to keep the long time conference mates together, geography be damned.

This alignment literally splits the MAC into two, I think it might be even worse than the 'Legends and Leaders' arrangement the Big 10 fell into. 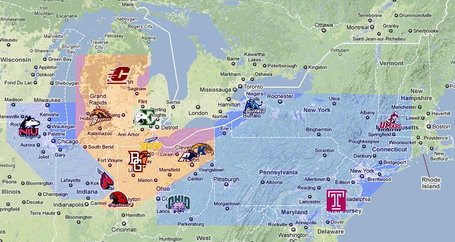 Northern Illinois has an average trip of more than 550 miles.The only MAC School that is drivable to them here is Ball State. BSU is almost as bad off with Ohio and NIU being drivable.

This also breaks up Miami and Ohio, one of the more heated MAC pairings.

The Priority is to keep as many rivalries intact as possible and work on building new ones.

There is still one very long division but Northern Illinois is not quite on an island here. They still have the corn stalk game with Ball State and they also have a very drivable home game with Miami. Ohio is a long dive but 500 miles is doable every other year. They would still have three flights every two years (Temple, Buffalo, UMass) but that's manageable compared to the North/South model. 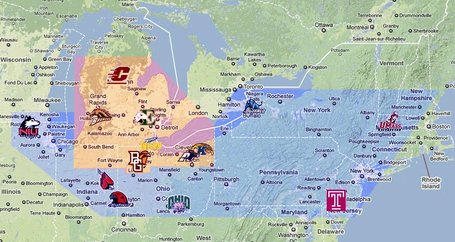 Buffalo has nobody within 400 miles (technically OU is 390 miles away). While 6 schools are long bus trips having Akron and Kent sitting in a different division just 200 miles away seems a might unfair.

So what do you think?