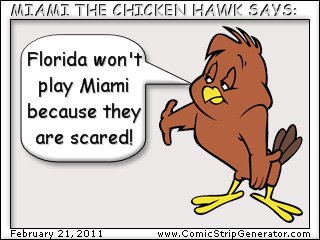 Florida is scared of a team coached by a man who *never* beat a MAC team with a winning record? Really?

Miami Has Minor Uniform Update, And Reminds You Florida Is Afraid - From Our Editors - SBNation.com
It’s the press conference equivalent of saying something obviously while coughing, like "COUGH COUGH [ florida is afraid of us ] COUGH I’m sorry what was I saying?

Guzman returns, Bernard and Crawford ink deals with Als
"Ramon solidified himself as a starter last season. He has become a leader and can play many rolls for our football team. He can blitz off the edge, drop into coverage, play off the hash, cover man to man and play both the inside and outside linebacker position," vice president and general manager Jim Popp said.

Bulls Conclude Play In Georgia With 2-0 Loss To North Dakota St. - Buffalo Athletics
The University at Buffalo softball team was locked in another pitchers' duel on Sunday morning, falling to North Dakota State, 2-0, at the Georgia Softball Classic. The Bulls conclude the second weekend of play with a 2-8 overall record.

Bad news again for UT - Toledo Blade
Down to just five scholarship players for Saturday night's game, the University of Toledo fell to Eastern Illinois 75-58 in front of an announced crowd of 4,257 at Savage Arena. It was the Rockets' ninth straight loss and their seventh defeat in eight contests in the annual Sears Bracketbusters event.

Rewriting The Record Books - The Spectrum - Sports
Desi is a junior at UB and possibly the greatest wrestler to ever wear the blue and white. He's on the verge of becoming the first wrestler in UB history to win 100 matches before his senior season.

Bulls get a victory for Reggie - UB Men's Basketball - The Buffalo News
Just days after his father lost a three-year battle with cancer, Witherspoon and the Bulls secured an 80-65 victory over University of Wisconsin-Milwaukee in a BracketBuster matchup on Saturday. With junior guard Zach Filzen leading the charge with a career-best 30 points, 20 in the first half, UB used its trademark defensive intensity to rebound from back-to-back losses in front of a vociferous crowd of 3,694 in Alumni Arena.

MAC BracketBusters Review: Location, Location, Location - Hustle Belt
Buffalo 80, Milwaukee 65 — Here was your tearjerker of the day. Reggie Witherspoon's father died earlier this week, and then the team came back around with a big win over a solid Horizon League team. Also, there were mucho students in the stands, which helped to nearly double their average home attendance. And it took this long in the paragraph to mention Zach Filzen's 30 points. Shows you how much was going on in that arena Saturday night.