Share All sharing options for: Who's Talking Bull? Captain Obvious (Rivals), that's who! 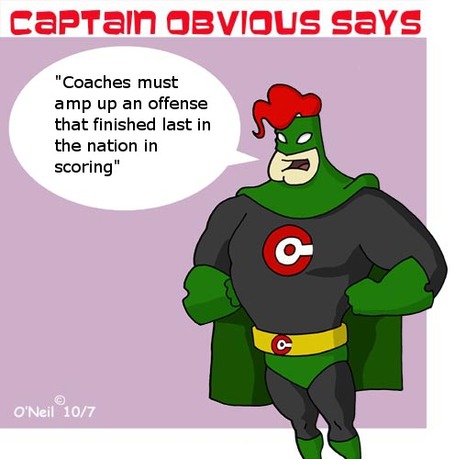 Rivals.com College Football - MAC spring primer: Coaching changes
The buzz: The Bulls will focus on revamping the offensive line and developing a quarterback. Coaches must amp up an offense that finished last in the nation in scoring (14.1 ppg). The Bulls ranked 111th out of 120 schools in total offense and 102nd in rushing, with only three rushing TDs. Coach Jeff Quinn fired coordinator Greg Forest and receivers coach Juan Taylor. Rebuilding the secondary will take top priority on defense

Bulls Aim To Make History This Season - The Spectrum - Sports
The softball team had only a fleeting moment of success as it closed out last season before bowing out of the Mid-American Conference Tournament after two losses. With a new season about to begin, the Bulls look to field what is arguably their best team ever in hopes of finally capturing a MAC title.

Proposed rule changes may give college football an NFL look - ESPN
On Thursday, an NCAA committee proposed adopting a 10-second runoff for clock-stopping penalties in the final minute of each half, changing the intentional grounding rule and experimenting with placing umpires behind the running backs.