Coach Spoon's MAC Teleconference.. Can the West be won?

Share All sharing options for: Coach Spoon's MAC Teleconference.. Can the West be won? 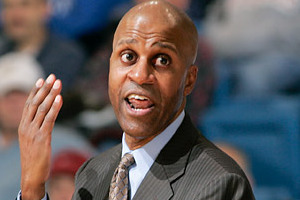 I expected UB to get through the east at 3-2, but I thought those losses would come to Akron and Kent, not to Bowling Green and Miami. Thanks to Kent putting a smackdown on the RedHawks this weekend the east has four teams tied with no clear tiebreakers. The only thing we know in the East is that Ohio has some work to do (still don't count them out).

Now that the cross division swing is coming up the MAC is holding its second teleconference of the season. Coach Witherspoon sees the east as it should be seen, way too competitive to pick a team or two to win it at this point.

The Bulls two losses came on the last shot of its first two conference games. This is attributed mostly to youth in coaches opinion.

"In some cases maybe it seems they are young, I don't know if that's the whole thing. I have noticed that there has been a lot of times where you look and say man this guy, sometimes its a player and that guy has a huge impact on the team. Sometimes it's just a team." -- Coach Reggie Witherspoon

When pressed about where UB fits in the East he joked it varies from half to half. He pressed the point that UB Can be very good but nothing they have done makes the team accomplished enough to settle. In his words "We have not gotten to the point where we are making a step forward every day"

The full audio is below, hopefully showing up as I am trying out the html 'audio' tag.. If it is not working on your browser you need a new browser ;) In the mean time here is the file. If any of you html guru's out there have better code for embedding ogg in the page drop me a note..