It would be the last season of UB's first dip into football as the university would not take to the gridiron again for a dozen years. 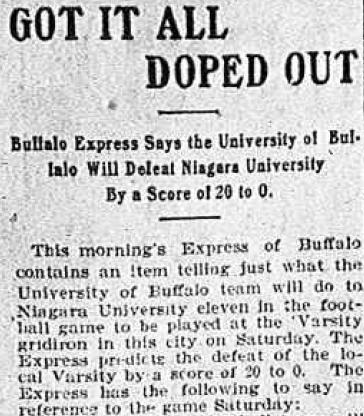 1903 might been the end of UB's first era of football but it was the birth of the Universities rivalry with Niagara.

The teams had already matched up several times but the Buffalo Express and the Niagara Gazette newspapers in 1903 really started sniping with each other.

It started with a set of home and home dates on the schedule and peaked when the Buffalo Express and the Niagara Gazette started trash talking, this is the kind of bulletin board material that respectable papers used to print but is now typically in the wheelhouse of blogs and fan pages.

On October 13th, after listing the probable starting lineup the Express noted "With that team-In the field the U. of B. should beat. Niagara University about 20 to 0 or upward under ordinary circumstances."

The Gazette printed the quote the following day and followed up with their own thoughts.

This will be a hard struggle for Buffalo's big team and many predict, despite U. of B.'s great collection of good players, that Niagara University's heavyweight team cannot be beaten on their own grounds. It is a long-established fact that Niagara University is unbeatable on Its own gridiron. -- Niagara Gazette 10/13/03

The reality was that the title of the Niagara Gazette article was pretty misleading. The Morning Express did say "under normal circumstances" and then went on to say NU was a hard team to play on their home field.

There were hints that the UB Niagara games would be close. Earlier that season both teams had played a common opponent, Masten Park, and both beat them by similar scores. Buffalo won 10-0 and Niagara defeated them 5-0. This had all the makings of a close series and the teams did not disappoint.

In the first half UB used a series of solid short runs against to pound their way down the field. In the it was end Cannon punched it in and Lawton hit the goal to make the score 6-0.

Buffalo had a speedster, Lane, at the Quarterback slot and on the day he ran down several big Niagara runs. At one point in the second half he stopped what seemed like a sure touchdown by sprinting down field to stop Niagara at the 10. While NU did eventually drive the ball in on a later play they had to go so far around the end that the spot after the score meant NU had to play the try goal perfectly to succeed. Unfortunately for UB Niagara put in an amazing drop kick to tie the game 6-6.

From there the Buffalo defense buckled down and the offense pounded Niagara into the ground. Behind great running by Turnball Buffalo drove in close to the goal and Rasey drove it in, followed by another Lawton goal. Turnbull would be the workhorse on one more Buffalo drive, pushing a befuddled Niagara defense into the shadow of their own goal once more. Once again Turnbull's effort netted him only an assist as Bachman put up the insurance points to ice the game.

Later that season Niagara would drop the return game at Buffalo, this time in an even closer match. Rasey got things going for UB early in the second half but Buffalo was unable to convert on the try goal. Buffalo expanded that lead on an 80 yard run by Bennett.

Niagara walked right down the field on the following drive, and converted the goal to pull withing four points.

Throughout the game players exchanged barbs. Partly due to the Buffalo Express once again running an article talking down Niagara and partly due to fact even the officials could not get along.

Dr William "Billy" Bott a former UB player and Niagara's Martin Tarpey were the officials for the contest and each seemed to call a rather questionable game. The Gazette noted "They lost no opportunity to penalize the players, and when the chance did not arise it is believed they made one".

The penalties, perceived and actual dragged the game on for hours, the last of the game was played in darkness. In the end the NU games were the last bit of success UB would see

Outside of UB's games against Niagara the school bear Westminster college but dropped collegiate games to Allegheny, Hobart, and were obliterated by Rochester. The team also split their exhibition games by beating Masten Park and getting shut out by the Oakdale Athletic Club.