The MAC is set here is the fallout

Looking at the MAC Bracket and where UB fits 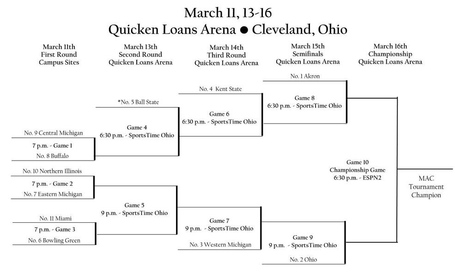 Kangaroo blood in the water?

Firstly Akron is in the same bracket with the two teams that defeated them this season. Buffalo beat the Zips before they lost Alex Abreu and Kent defeated them the game afters. Buffalo and Kent teams that may lack consistency needed to win the tournament but are dangerous enough to beat anyone in the conference, certainly anyone on their side of the bracket.

Because of this Kent may be riding the best non premium seat in the conference. They need just two wins to MAC the MAC Championship game. They will face either Ball State who will have played one game already, or the winner of Buffalo and Central Michigan who will by that point have played two.

The Card of course get a rare one game bye because of Toledo's exclusion from this years tournament due to their team having failed academic benchmarks set by the NCAA.

Of course Akron has now had time to absorb the loss and hopefully scheme around it, though the way they ended their season would seriously drop their NCAA seeding should the win the tournament and has completely ended any hopes of them landing an at large spot it they fail.

The vacuum left by Akron may embolden Ohio in their quest for yet another MAC Championship. Western Michigan landed the number three seed should be well positioned to make the semis. The bottom half of the conference is very week this year.

Jordan Crawford and Bowling Green might be able to make a run considering they kick off against Miami, the worst team in the conference, and would then face either Northern Illinois or Eastern Michigan both teams have already lose to Bowling Green this season.

NIU beat out Miami by a tie breaker making it the first time in some years the booby prize of the MAC went to a team from the Eastern Division. That fits the narrative throughout the normally strong East. A division which normally seeds 1-4 in the MAC Championships, if not higher, was very weak after Akron and Ohio.

Akron's trouble may have handed Ohio another trip to the dance but record aside Ohio's last games against Buffalo and Kent were hardly convincing victories. They Beat the Bulls on a last minute shot and needed overtime to take down the Flashes. Factor in the need for a big comeback against Miami in their final regular season game and the makings for some very unpredictable matchups emerge.

The way they finished the season was disappointing but the Bulls are actually well positioned to make some noise this season. Five games might be asking a bit much but UB beat both CMU and Ball state pretty handily and are due against Kent.

That would set up a rematch with Akron which could be winnable if the Zips are still reeling.

The teams that really scare me like Ohio and Bowling Green are on the other side of the tournament. Short of some huge upset over there Ohio makes the championships and no team has UB's number like the Bobcat's.