What Is Buffalo Sucks?, or How I Learned to Love the MAC Tournament & Hate Ohio

Share All sharing options for: What Is Buffalo Sucks?, or How I Learned to Love the MAC Tournament & Hate Ohio

As a freshman in 2003, UB Football and Basketball were both one time events. The Football home opener was an event, a tailgate in the fading warmth of Buffalo in early fall, a concert, and a blowout by halftime, where, even if the score was close, most students would leave to start partying on South Campus. I didn't go to the 2003 Basketball opener, and for a few months I regretted that decision, not because I missed good basketball, UB lost to Canisius, but because I did not get my free "Mighty Maniacs" shirt.

That first year, UB football was nursing a historically long losing streak before beating Ohio. Ohio was the only MAC team we could beat in those days, it didn't make us rivals, it just meant both teams were bad.

The 2002-03 Bulls Basketball team won 5 games, so there was no enthusiasm for UB Basketball during my first semester, however that all changed, in February. I spent my winter break in Cleveland, where I saw Kent State jump out to a 11-3 record, which made me even less eager to return to Buffalo and watch the 5-9 Bulls. In a month, the Bulls would go on an incredible 6-2 run to even their record at 11-11, culminating in a matchup against the 20-3 Kent State Flashes, who were riding a 10-game winning streak.

UB asked everyone to wear blue and 6,176 fans arrived to form a "Sea of Blue." UB stormed to a 82-66 victory and the sea spilled out onto the court after the final buzzer. A few weeks later, almost 9,000 people rocked the Arena as UB won their first ever MAC Tournament game over Northern Illinois.

Despite their success, UB lacked two things: A definitive home field advantage and rivals. I personally found my first rival in 2004 during my first trip to Peden Stadium. The fans were annoying, the band was good, but ruined their performance with childish antics, and the 34-point shutout loss angered me. Not to mention the stupid Ohio chant. 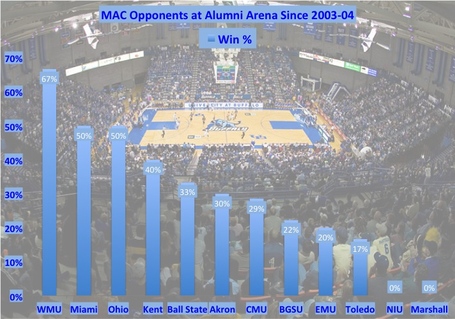 UB won 33% of their home games before 2003-04, but they have won 70% since. UB gained their home court advantage, but they still lacked a rival, that is until the MAC Tournament. In the opening round of the 2005 Tournament, UB would again dispatch of NIU, although this time the fans at Alumni were over that small accomplishment and ready to do damage in Cleveland.

The fun of the Cleveland games is that it is a rare situation where fans from eight schools are all in the same building. It was there I realized the fans develop the rivalries, not the teams. The next night 4 teams returned, Ohio beat their arch rivals the Redhawks and Buffalo took on Western Michigan. As Buffalo played, an in-game promotion gave an Ohio fan center stage, he used it to poke at Buffalo.

The student had to answer three questions and hit a shot to win a prize. He wasted his 3 trivia questions to say "Buffalo Sucks." The kid got the response he wanted, 3/4 of the Arena laughed and 1/4 of the Arena exploded with murderous rage. Once it became apparent Buffalo was going to make it to the final, I remember Ohio fans running to the UB student section to antagonize us while we tried to enjoy our victory.

I already hated Ohio, but at that moment, hundreds of UB fans who made the trip hated Ohio too. We had our rival and we were going to face off for the championship. Some from Bobcat Nation will read this and say, "man I can't believe Buffalo hates us." To that I'll say a few things:

1) Not all of Buffalo hates Ohio as much as I do, but in my travels, places/fans I hate ends up being 1) Ohio, 2) NIU, 3) Ball State. I hate Kent State's team, but I have never had any issue with Kent State people. Ball State disparages Buffalo, which fine, but from Muncie, you are not in the position to criticize anyone else's town. They also have MAC Championship Truthers, (But MiQuale Lewis scored! boohoo) and people who won't give Buffalo respect for earning the win. NIU had the most arrogant fans I've ever seen, and not Orange Bowl NIU, like ten years ago NIU, I can't imagine how bad they've become now. But Ohio takes the cake for me, that said I know a lot of Ohio U Alums and they are all great people, maybe the two schools are too similar to ever like each other...

This year Buffalo has avoided Ohio a team they have struggled to beat during the DJ Cooper era. Their path to the title game is CMU > Ball State > Kent State > Akron. UB is 3-3 against these teams this year. The biggest test should be Kent State, UB lost both to Kent, including choking away a big 2nd half lead in the 2nd meeting. Buffalo would also face hostile crowds in the Kent and Akron games, the teams closest to the Quicken Loans Arena.

Every year since the '05 tournament, it seems teams have gotten better. No MAC West school has won the Tournament since 2004 when Western Michigan won, this year WMU might be poised to win it again. Since 2004, the Tournament has been dominated by Akron, Ohio and Kent. Will this be the year where a darkhorse, maybe an 8th seed, surprises the conference and wins? I hope so, but more importantly, I hope Ohio loses, and just maybe I hope some annoying kid from an equally annoying MAC school gets on the mic and sparks some more hatred, because that is what the MAC Tournament is really all about.