Buffalo upends Akron: How Filzen Got his Groove Back!

Share All sharing options for: Buffalo upends Akron: How Filzen Got his Groove Back! 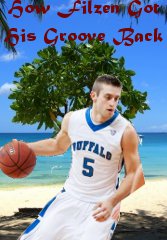 In order for Reggie Ball to be effective Buffalo needs an outside shooter that worries the other team. For Buffalo that's typically Zach FIlzen, but lately he has been missing in action.

Filzen was playing a pretty consistent season up to and through the BYU Game however he has been more of a liability on the court than an asset for almost a month (not counting the Buff State Game). Against teams that matter, again omitting Buff State, he has been shooting a putrid 2% from the field and never took more than four shots since the Bulls took on BYU.

This is the guy who owns UB records for his work beyond the arc.

Last night against Akron Filzen made a difference right off the bat with a defensive rebound that gave Buffalo it's first possession. When he answered a Nikola Cvetinovic three point shot seconds later to keep UB in the lead it started to feel like his night.

"My movement was a lot better tonight. I wasn’t as aggressive in looking for my shot the last couple weeks. I tried to come out and move as well as I could, and when I was open, I just let it fly. I’ve worked a lot of hours, and I knew I just had to trust that." -- Zach FIlzen

While the win over Akron was a team effort the number of times Filzen came up with a clutch play stands out and his 21 points night will hopefully put an end to his recent troubles. His late three put the zips down by two possessions and force them to start putting the Bulls at the line. From there is was Jarod Oldham who made them pay by going 3/4 in the last minute of the game.

That's the kind of night it was. Filzen came out of his shell and everyone around him got to cash in on it. Javon McCrea added 15 points and Mitchell Watt and Oldham finished with 11 apiece for the Bulls.

Ben Tsujimoto over at Buffalo.com pointed out that every Bull who made it to the floor last night managed to get at least a point. I'll point out they all also put down a rebound and ironically everyone but Filzen shot better than 50% from the line.

Right now the MAC East is wide open. Miami is a game behind the Pack and Akron, thanks to last nights game, is now just one in front of everybody. UB's next game is against Bowling Green, a team who's zone has done nothing but frustrate the Bulls for years.