Bull Fan Stampede: If I could turn back time.

Share All sharing options for: Bull Fan Stampede: If I could turn back time.

So far this season is going about like I expected yet it's oh so painful. Does the rest of Bulls Nation agree?

1) I think, for the most part, we all expected more out of Quinn  than a 3-13 start. While there were those who voiced objections most fans thought it was a good hire. If you had a souped up Delorian in your garage would you fire it up and tell Warde Manuel to hire someone else (who) or is the sorry state of UB Football an unchangeable function of talent cycles.

UB2010: It is time for Warde to start looking at alternatives.  Let be first to say that this year’s team is far superior to last year’s team.  That being said, we still are losers in the MAC.  Again, I understand the hire.  Would you hire a person with confidence, track record of success, plan to motivate the community, actually wanted to come to Buffalo, and is easy to have a conversation with.  Now, there is a fine line between confident and arrogant.  Just by looking at the coach, he looks like a beat man.  Added weight, loss of hair, tired, and does not talk with the passion he first came to UB with.  Does he still believe he has the skill set to be successful?  Is Coach learning?  My two cents, it was a bad hire.  If I was Warde, I would have made the same hire.   But if Warde is me, it is time to make a change.  Bulls had the greatest window in Buffalo history with the Bills sucking for a decade to gain major traction.  The time has changed in Buffalo Sports the past three weeks and the love that Bulls felt going to the International Bowl is gone.  Long Gone!

I am not looking through Rose Colored Glasses, but I believe with the players on the roster now with the right head coach, this team can be good next year and great in 2013.

BRJACR: You made a time machine? out of a Delorian? 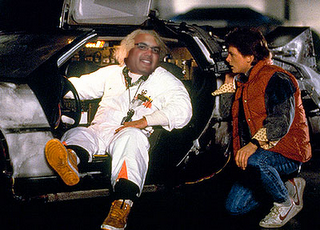 The way I see it, if you're gonna build a time machine into a car, why not do it with some style?

If I had a time machine, I wouldn't be going back to when Warde hired Coach Quinn, I'd be going back to 1776 when the ridiculousness of New York State government all started.  Maybe, if NYS wasnt so damn screwed up, New York State ?State?, or UB,  would be a college football powerhouse along with Penn State, Ohio State, Michigan State, Florida State, or any other State school.  Honestly, its way too soon this season to even ponder Coach Quinn's position.  Has it been perfect, hell no, but UB has yet to play a MAC East team yet this season.  Turth be told, I am impressed with the fact that Coach Quinn after last year, 1.  decided to go bigger stronger with the offensive line and 2. finally realized the necessity of a fullback.  So its not like he isnt trying.  Talk to me after the season.  As far as the talent end of it.  Not even an option with me because since the Kansas Head Coach was here, the level of the talent coming in is far beyond what UB ever had before, and Coach Quinn is taking it further.

CHITOWN: I would not go back and tell Warde to make a different hire. I still believe in Quinn, and untill he gets a fair chance at the job (3 full years), I am not ready to make a final judgment on him. I think it is way out of line for people to start calling for his head right now. It is his second year. Lets all remember the completely different play style that we incorporated with Quinn. Not only on offense, but defense too. Until Quinn gets his players, (which we are seeing a little of this year, and will see a good amount next year), then its not fair to Quinn. Look, most people projected 3-5 wins this season. I feel like we are WELL within the reach of this possibility. Yeah, our next five games are tough but we are a competitive team. We have played some good teams, and we have not once gone in to the 4th quarter, feeling as though we have no chance. This team this year will win some games. It might not be in the immediate future, but the last 3 or 4 games of the season we can do well.

2) At what point this season do you start playing with the Quarterback situation. Anderson is not playing awful but he is gone next season. When UB loses their 6th or 7th game and any shot at a bowl is gone do you start splitting time or not?

UB2010: It would not make sense to throw a new QB in the fire against the Vols.  Our best chance to win that game is with Chazz.  If UB losses to both Ohio and Temple then it is time to start a new QB.

Plus those games (especially Miami, Eastern Michigan, and Akron) should allow the new QB more time to read the D and react to build confidence.  Confidence is a good thing.  That would make the Bulls 1 – 7.  I do not want to hear that Buffalo could run the table and make a bowl game.  The season is over if UB loses to Ohio and Temple (and no way do I expect a win against Temple!)  I then do not want to compound the fact that UB will have no QB on the rooster that really feels comfortable with the system heading into next year.  The pieces are in place for a good run next year IF UB HAS A QB.  The defense will be better, O-Line will only get better, and the core of the wide receivers and running backs are still intact.

The issue is, and the biggest issue is, who is going to steer the ship.  We need to find out this year.  I will be willing to sacrifice wins this year for wins next year.

BRJACR: Yes, you have to start playing someone else just for them to get game experience for the sake of next year as well.  There is only so much you can get from holding a clipboard or getting practice reps, it just doesn't compare to live game experience.  I know when Chazz came in, and everybody handed him the job, and it was Chazz this and Chazz that, and win now!, great, he won the job, but the QB situation is still unresolved.  If UB gets to 6 or seven losses, and any shot at the division ends, throw in Zordich and see what hes learned.

CHITOWN: I think you are on to something. When we hit that 7 loss plateau, we may want to think about playing Zordich. Unless of course, there is still an outside shot of us winning the MAC East. Once we are officially eliminated from MAC contention, and a bowl game then why not play Zordich. No point in playing Anderson at that point.

3) Was last years loss to UConn more or less painful than this years loss and why?

UB2010: This year’s loss was more painful.  Last year we just plain sucked.  This year, there is no reason why UB could not have beaten UCONN.  Last year, a win would have been a major upset.  This year A win would have not shocked anyone.  This loss really stings.  Stings because the Bulls should have been progressing towards this win and all I see is regression.  And it is a shame because UB really has a great nucleus of players who can make things happen.

BRJACR: This years loss was more painful.  Why, because I was actually sitting in the stadium watching dreadful offense.  Seriously, UB had a really good shot at UCONN this year, had the offense managed to do anything.  The defense played well enough to win, and special teams had a pretty good effort.  Three points on 14 offensive possessions.  Regardless of the missed Field goal or the interception that shouldnt have been because the Big East Officials screwed that call up in the first place, 14 possessions = 3 pts, not good enough to beat the Colorado School of Mimes, let alone UCONN.

CHITOWN: I would qualify this years loss as more painful. Even though we were tied at half last year, I think a lot of us felt that UConn was going to put us away. This year was different. For one, we were home and had a decent crowd, and a packed student section to cheer on the team. Second, we are a better team this year and UConn is a worse team. Third, we left so many points on the field this game that it felt like we really should have been winning for the majority of the game. This one stings because I really felt like we had everything in our favor, but we just couldn't pull through.

4) What future games jump out as games UB must win to avoid complete and utter shame.

UB2010: I do not see a win in Tennessee nor a win in Philly against Temple.  I also do not see UB beating Ohio or Bowling Green.  Lord help me if we drop two out of three to Miami, Eastern Michigan, and Akron if we run the same personnel.  I also do not see Buffalo beating Northern Illinois.  The game that jumps out at me is Ball State.  That loss set this program back a long, long, long way.

To answer your question, if we lose to Akron then much shame will be brought upon me.   Like some English Pig with No Brain.   (insert goalie Denny Lemieux from SlapShot!) 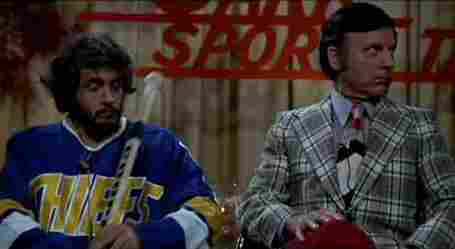 BRJACR: Pick one, Eastern Michigan, Akron, Bowling Green, Ohio, Miami (OH), Northern Illinois, hell, throw in Temple.  I don't want to be a wanna be in the MAC.  The notion of that ever happening again makes me sick.

CHITOWN: Avoiding complete and utter shame... I would classify that as winning at least 4 games. In order to do that, we would have to beat EMU, Akron and Bowling Green. If we want to win 6 games, and at least be considered bowl eligible then we would have to win 2 out of the 3 games vs NIU, Temple and Ohio. It is not completely out of the question, and I expect us to compete and be in these ball games. One game at a time.

5) If, by some miracle, UB beats Tennessee but drops every other game this season is that better than winning the games you listed in number 4?

UB2010: No.  Tennessee is just a payday for Buffalo.  It is really the MAC that I get worked up over.  I just hate losing to team like Ball State.  Also kills me that Temple is so far superior to Buffalo.

Currently Buffalo is ranked by the MAC pickers as the 10th best team (out of 13) in the MAC.  I am not sure that we are over-rated!  I need to go now before I commit hara kiri.

BRJACR: No, Im not going to trade.  Sure a victory against Tennessee would be nice, but I'd rather see UB doing damage in the MAC more.  Have to be dominant in the MAC if this program is ever going to go places.  How about we try this one on, Beat Tennessee, and then go on to beat every MAC team the rest of the season.

CHITOWN: No, not really. If we somehow beat Tennessee and lose to the likes of Akron, EMU and BGU then that TENN win is a waste. Bottom line is, we are going to Tennessee to get some money. Lets get out of there relatively healthy and focus on a winable game at home vs Ohio.