Talking Bull: CCHA to be assimilated

Share All sharing options for: Talking Bull: CCHA to be assimilated 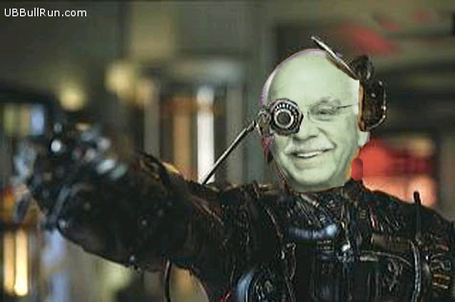 Well it was inevitable after the Big10 Member squatting in the CCHA decided to strike out, along with PSU, an start Hockey within the conference.

The CCHA, is on life support and WCHA commissioner Bruce McLeod is coming to pull the plug.

WCHA to Absorb Remaining CCHA Teams - Hustle Belt
Thats right. The CCHA, founded in 1971 with Bowling Green, OHIO, Ohio State, and St. Louis, will most likely end after the 2012-13 season. As the story broke today, I couldn't help myself but think, "wow, how did a conference that was so dominant end so rapidly over the course of ONE SUMMER?" Well lets look at the chain of events. . . .

Many of the remaining teams are leaving to be a part of a new power conference leaving some five members stranded. Those members all have an invite but, and tell me if you heard this one before, nobody knows where they are going to go until Notre Dame makes up their mind.

Western Michigan is the one CCHA school of the remaining five least likely to join the WCHA. It is waiting for Notre Dame's decision to see if it can join the Irish wherever they go. The wrinkle will be if the WCHA puts a time limit on Western Michigan's acceptance, and force them to commit for a certain number of years.

Bowling Green could balk as well, figuring it could go to the NCHC with Western Michigan if Notre Dame chooses Hockey East. However, it's difficult to wait for Notre Dame, not knowing when a decision is coming.

Yea you and everyone else!

Imagine this SMU wants into the Big12 should Texas A&M should win... Hell you cant find a non AQ team that would not join the Big12 if they are invited. Hawaii, Buffalo, Wyoming... There is no corner of this nation that does not contain a mid major who would be happy with such an invite.

But the key is... wait for it... They think becuase it benefits one team in the conference it will work, lucky for them they think its Texas. Lord knows the Big12 could give a flying fart if it helps Iowa State

Texas A&M Alerts Big 12 To Impending Exit, Texas Reportedly Turns Up Nose - SBNation.com
"We are pushing for it," SMU president R. Gerald Turner said. "We want the city to know we’re pushing for it. We need as much help as possible, even from non-SMU alums. We believe it’s good for Dallas."

After the Jump: UB Links

UB closes up camp " Sports " Niagara Gazeyty tte
"Our kids played with great effort," said Quinn, whose team will have a light practice on Saturday. "Certainly we know, improvement needs to take place. We need to stay healthy, we need to stay locked in and play team football on both sides of the ball and special teams. I like the way our kids came out here and competed on a daily basis.

13 Teams/13 Days: Buffalo Bulls > MAC > News
That side of the ball will be a point of emphasis for the Bulls in Year 2 under Quinn. Nine starters return, and a lot will depend on the output from the quarterback position. Coming out of spring drills, Jerry Davis was the starter, but he’ll be challenged by Alex Zordich. Quinn brought in a new quarterback coach in hopes of improving the Bulls’ passing attack that threw a league-high 23 interceptions and averaged 184.2 yards per game in 2010.

Miles can't sever ties between Jeff Quinn and his coaching mentor Brian Kelly - College Football News | FOX Sports on MSN
Quinn likes to joke that once he took over on an interim basis for Kelly at Cincinnati and coached the Bearcats in the 2009 Sugar Bowl, he believed that Buffalo was another stop en route to heaven. In truth, he was smitten with UB and loved the region. He thought it was time he took his career in a new direction.

This one really hurts. Syty had bulked up to an amazing degreein the off season but symptoms from a previous concision have just, potentially, ended his career. It is the second season in a row that UB loses a starting middle linebacker in the weeks leading up to the season.

Concussion ends Syty's season before it starts - UB Football - The Buffalo News
But Syty's been absent from the field since early in camp. And Thursday night, following UB's final scrimmage session, Quinn detailed the reason. Team physicians have recommended that Syty sit out the season because of symptoms related to a concussion.

Bulls Tune Up For Regular Season With Blue & White Scrimmage - Buffalo Athletics
The University at Buffalo volleyball team continued preparations for its season-opener on Friday with its annual Blue and White scrimmage, held Wednesday evening at the Ed Wright Practice Facility. Despite some roster shuffling through out, the White team won all four sets.