Who's Talking Bull: Ohio State, Come on Down...

Share All sharing options for: Who's Talking Bull: Ohio State, Come on Down... 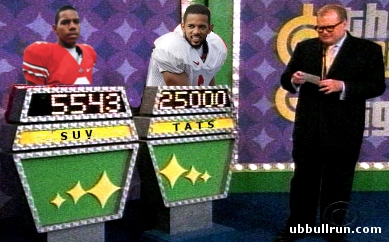 And the Actual Retail price of your showcase is...

Muhammad Wilkerson Is Primed To Succeed With The Jets - Hustle Belt
After a lengthy one-year drought, the Mid-American Conference sends another player to the NFL via the first round. It was rumored that Muhammad Wilkerson was going to be taken somewhere in the 24-30 range according to scads of mock drafts, and the Temple defensive tackle is going to be plugged right into the nose of that New York Jets' D-line.

Sports - The Spectrum - Sports
When the softball team lost 6-2 against Canisius last Tuesday, Bulls fans probably thought it was another missed opportunity for the team.

Bulls Open MAC Championships With Shutout of Chicago State - Buffalo Athletics
The University at Buffalo men's tennis team wasted little time in scoring a 4-0 victory over Chicago State in the quarterfinal round of the 2011 Mid-American Conference Championships in Kalamazoo, MI. With the win, the third-seeded Bulls (12-7) move into the semifinals to face second-seeded Toledo (23-9) on Friday afternoon.

O’Brien Finishes Second in Shot Put as Penn Relays Gets Underway - Buffalo Athletics
First day competition at the Penn Relays at Philadelphia's Franklin Field got underway on Thursday with the University at Buffalo's Becky O'Brien earning a second-place finish in the women's shot put.