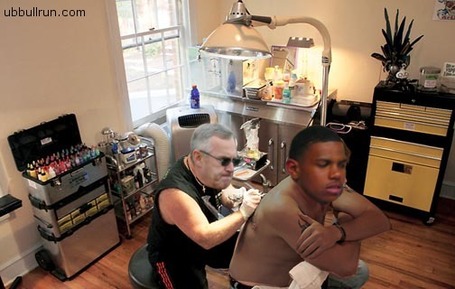 Jim Tressel Investigation: Ohio State's NCAA Notice Of Allegations Arrives - SBNation.com
It's a quiet Monday in college football, and this offseason, that can only mean one thing: Time for another hallowed program to sink further into an NCAA quagmire of its own making! Ohio State has received the dreaded Notice of Allegations from the NCAA, and the Columbus Dispatch has the documents. In a continuation of the theme established earlier this spring, with charges leveled directly at coaches like Lane Kiffin and Bruce Pearl, the university appears to have dodged the failure to monitor charges as well as the hammer of a "lack of instifutional control" label, but Jim Tressel could face major sanctions for his alleged role in covering up violations committed by multiple Buckeye football players, some of which would have ruled starting quarterback Terrelle Pryor and other team leaders ineligible for all of 2010.

Fiesta Bowl makes case to BCS to stay in championship series - USATODAY.com
The Fiesta Bowl made a strong case here Saturday to stay in college football's prestigious Bowl Championship Series, hoping that promises to clean up self-disclosed financial mismanagement, potentially illegal conduct and lax board oversight will be enough to keep it in play.

College Football Countdown: No. 113 Buffalo – College Gridiron 365 Blog – Orlando Sentinel
Stability and consistency at quarterback will be key for the Bulls this season. Especially considering a younger and inexperienced defense will be called up to stop teams. Tough non-conference games against Pitt, UConn, and Tennessee won’t be easy and conference matchups against Miami, Northern Illinois, and Ohio will present lots of challenges for Buffalo this season.