Facebooking the Bracket: All Hail our Computer Overlords

Share All sharing options for: Facebooking the Bracket: All Hail our Computer Overlords

Ever wish that more things worked like college brackets? That you could seed everything that way? Top 64 pre-game foods. Top 64 college players. Well, now you can do just that with your friends, with the Allstate BFF Brackets, which takes your 64 top Facebook friends (an algorithm seeds them based on interaction) and seeds them in four regions, exactly like the real tourney. Once the tourney starts, your friends advance with the corresponding seeds – till one is left standing. Check it out at http://apps.facebook.com/bffbrackets/

I follow MAC hoops pretty closely but I really don't watch what goes on outside the conference for two reasons. First, there are way too many division on college basketball teams. Second, no matter who wins the MAC they are a 14-16 seed and they will be alone, conference wise, in the tournament.

So usually I skip brackets all together, but two years of running Bull Run has gotten me a bit more closely tied with blogs that do care about basketball. So this year I am going to put up a bracket as part of the All-State BFF Brackets contest (see contest info after the jump).

So how does a guy that doesn't follow the top 25 during the season pick a bracket? A combination of personality and computer power. First I am going to use the 'whatif' machine to figure out the most likely outcomes of the games. Run each three times and average it out.

Then, because it's likely the computer will give boring results I'm going to inject a little personality by picking a few upsets and running the rest of the bracket after that. What's the point of always picking the favorite? If you're goinna lose just go down in flames right?

So here is the straight up computer simulation: 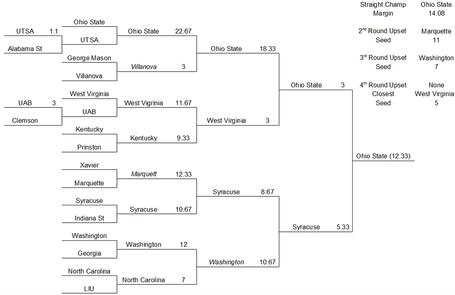 Pretty Boring right? A couple of upsets most notably #7 Washington makes it to the sweet 16 but once it hits the elite eight you have a #1 versus a #3, nothing earth shattering. Seeing that the Buckeyes had just a three point margin of victory in the simulations (over three games) I am going to flip them for my bracket. I am going to flip a couple of other close games, just because that's how I roll. 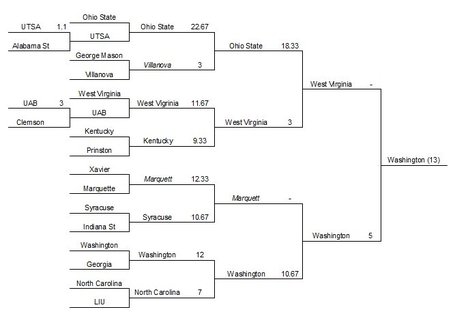 Ill be putting the rest up on BFF Brackets this week.