Share All sharing options for: Who's Talking Bull? Critical UMass 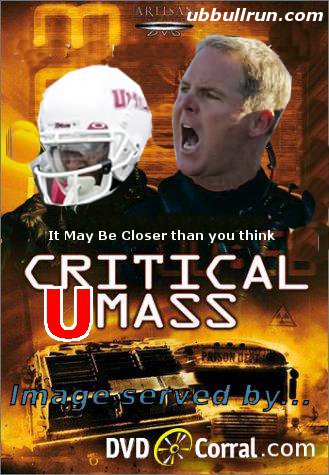 UMass expected to move to FBS - The Boston Globe
Although all parties are remaining vague about a date, indications are that the University of Massachusetts will announce its intention to move from the Championship Subdivision to the Bowl Subdivision, joining Temple as a football-only member of the Mid-American Conference, perhaps as early as next month.

Bulls Begin Final Homestand Wednesday Night Against Miami - Buffalo Athletics
The University at Buffalo women's basketball team begins a two-game homestand on Wednesday night as they host Miami (OH) to Alumni Arena. The Bulls are looking to snap a three-game losing streak, while the RedHawks are looking for their first win in nine games.

College Corner: The Irrelevant Bracket Busters : Buffalo Sports Daily
No, the 80-65 win over Wisconsin-Milwaukee won’t stir the NCAA Selection Committee into considering the UB Bulls (16-9, 7-5 MAC) as a possible at-large team. No, the Bulls, riding a two-game losing-streak and losers of three of four, didn’t move up in the MAC standings after falling from the top so quickly.