Its been two years since James Starks helped Buffalo march to a MAC Championship. Since his season ending injury in august of 2009 the Bulls have never found one guy to carry the load the same way Starks did. During the 2009 season the Bulls managed success on the ground using a committee approach but two of the key backs in that rotation are now gone (Nduka, Thermilus).

Last season was, hopefully, a low point. The Bulls could never find anything even close to a running game. As a team they finished 101st in division one football with just over one hundred yards per game and 3.09 yard sper carry. Whats really scary is that the Quarterbacks accounted for a decent percentage of that work.

What was supposed to be a rich field of running backs collapsed under the weight of an ineffective line and a complete lack of ball handling. It was not until week five that the Bulls managed to get a rushing touchdown. The only rushing touchdown by a running back that UB would manage in Coach Quinn's inaugural season.

Because last seasons utter futility on the ground the field for halfback is probably the most wide open battle on the offensive side of the ball. The only thing shedding light on this race is the fact that last seasons seniors were used sparingly by Coach Quinn.

Brandon Thermilus got knocked out early in the season and Ike Nduka, despite putting up decent numbers (in comparison to the other backs), was relegated to spot duty.

What jumps out when you look at the running backs last season? The back who got the most work, Brandon Oliver, had the lowest yards per carry on the team. Despite receiving a much bigger chunk of the work the young guns managed just 3.4 yards per carry and no touchdowns.

In addition to the returning backs this spring will feature James Potts, UB's main prize from the 09-10 class. Potts missed last seasons camp, he had to work through the summer to pay off his tuition at American Heritage High School. Because of The late arrival at UB Potts spent last season in a redshit.

Gill Burst onto the scene in 2009 when Ike Nduka was hampered by injury. Against Ohio, in his first career start, he rushed for 172 yards and a touchdown on 23 carries. On the season Gill rushed for 252 yards on 40 carries (6.3 Yards Per Carry).

Most fans were hoping that kind of production would carry into 2010. Gill was expected to be part of a one two punch along with Nduka. The hope was that a presentable running game would take some of the pressure off young wide receivers and help the QB ease into the job.

Instead last season Gill was the only Back who managed a respectable yards per carry but never really became a fixture in Coach Quinns offense. Like all of the returning backs he never managed to find the end zone and had his share of issues holding onto the ball. 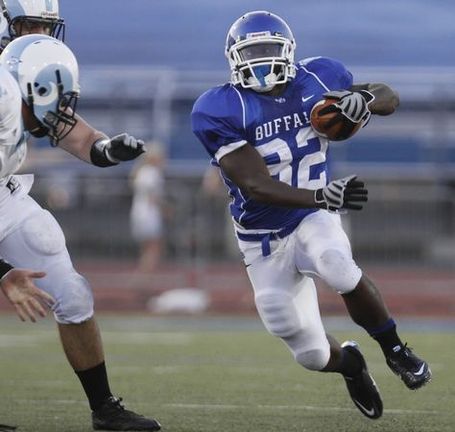 Oliver is that 'scat back' which every team needs. Despite his size Oliver managed to get better in pass protection as the season went on but as a ball carrier he never really produced.

Change of pace backs work when you have a line that can keep up with the pace and Oliver who is all of 5-7 and 190 pound just never could work behind a line that was wholly ineffective.

Despite his slow start as a pass blocker and a running game that peaked in week two Oliver seemed to remain Coach Quinns go-to guy throughout the season. He racked up 50% more carries than any other back.

Oliver may be the answer if the Bulls offensive line improves this season. He has shown real potential as a receiver out of the backfield which might make playing someone of his stature worth giving up the power that our other backs possess. In the limited work he got in the passing game he racked up almost 20 yards per reception with a long of just 34 (consistently over 15 yards).

Potts was the prize target by Coach Barret during his final season at UB. He was the recipient of more offers than you can count on both hands and quite a few of those were big caliber BCS schools (Michigan State, Rutgers, Cincinnati).

There was some worry that he might get poached after the departure of Coach Gill. Many schools pressed and Potts took a few January visits but he stuck it out with UB.

He missed last summers camp but he did arrive on campus in time to start classes and get a full year of practice in as a Red Shirt.

He's not incredibly big but he is tall enough that, with a little bulk, he will have sufficient mass to be a feature back. Had over 2,000 yards and 27 touchdowns on the ground in his final two seasons at Heritage. In pads, he has been clocked at 10.87 in the 100 meters, making him one of the faster players on the team.

Fuller is a walk on who saw the field twice in 2009. He was sidelined by a shoulder injury last season. Fuller really doesn't jump out as a guy who will be in the mix for this seasons depth chart, his numbers from the Nike Combine back in 2008 don't scream starter.

With three backs ahead of him on the depth chart, giving Potts the nod, and two more incoming freshman it's doubtful Fuller will still be in the backfield by the time summer rolls around but with his shoulder healed up he will probably find his way back onto the special teams unit.

While all eyes might be on the quarterback battle this is the one that may have the biggest impact on the 2011 season. No matter how good your receivers might be you simply can't run an offense without credible running threat. The Bulls don't need any of these guys to fill the role once occupied by James Stark's all they need is a guy that you can count on for four yards a carry 15 or so times a game.

If whoever comes out of Spring as "the guy" manages the four and a half yards per carry with a few touchdowns it will take a ton of pressure off the Quarterbacks. If the line improves and the running game stays as moribund as is was in 2010 then there are some serious personnel / coaching issues to address.