Share All sharing options for: Talking Bull: See you in Court Mountaineers

Better hope you don't get him as a judge:

If there is one thing that the last decade taught us it's this:

Nobody can just walk away from the Big East without creating a ton of drama and likely some serious time in court. Where Boston College bore the brunt of the last rounds legal fees this time around it's West Virginia who is the target of this rounds court action.

Well the Mountaineers signed what they thought was a nod-nod wink-wink kind of agreement but it turns out the remaining Big East members consider it a 'back out of this and we will sue you into the stone age argument. West Virginia tried to have the case dismissed, but to no avail.

But don't fret Mountain people, your school has a judge in their pocket and they are going after the Big East

Since then the school and Big East have each sued the other and filed motions to dismiss the other's lawsuits. A West Virginia judge earlier this month refused to dismiss a university lawsuit against the Big East.

I was quite relieved when enough schools banded together to scuttle the NCAA's 'full cost of tuition' **cough** Pay for play **cough**. They got together again to kill another of the measures put fourth by the big boys. On this one however the folks killing it are dead wrong.

The measure being killed would allow schools to offer a four year fixed scholarship rather than the current process of annual renewal. Personally I think four consecutive scholarship years, baring bad behavior or poor grades, should be mandatory among division one schools.

Schools object to NCAA multiyear scholarship plan - ESPN
Boise State called the move a "recruiting disaster" that would encourage a "culture of brokering" and pit wealthy schools with larger recruiting budgets against their less well-heeled brethren, while also obligating schools to long-term commitments that may not make competitive sense.

It's called taking a chance on a kid and living up to a reasonable expectation that *if* he uproots his life to go to Idaho that he can finish school there even if the new coach does not like him, or if your scouts were dead wrong.

These kids can't just leave a school, hop in a different program and start over, the have to sit a year. They made a commitment to your institution and if this is truly about student athletes make sure you give the students enough time. 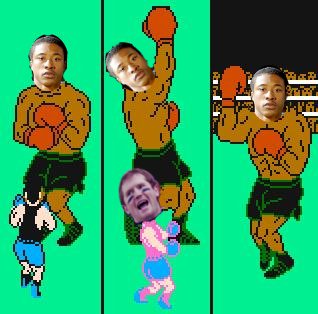 Yea but you should see the other guys fist:

Punch your starting QB out, sit home for the bowl game...

Drake has five catches for 102 yards and also played a key role as quarterback in the Wildcat formation during a Nov. 19 win at Ohio State. Bradley said receiver Shawney Kersey also did not make the bowl trip because of personal reasons.

He will be at home playing the latest retro craze... Curtis Drake's Punchout!

Get up Matt! Get up!