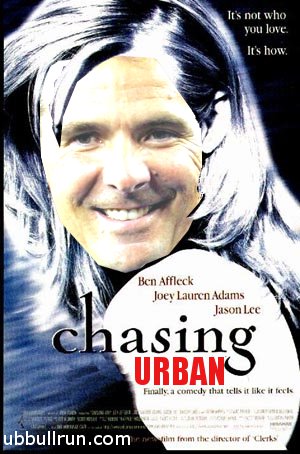 Will he or won't he? Why are the Ohio State Buckeye's "Chasing Urban"

Urban Meyer To Ohio State After Michigan Game, According To Report - SBNation.com
Last week, word somehow circulated that Scout.com was reporting Urban Meyer had agreed to become the next Ohio St. Buckeyes coach. Nobody could actually find the report anywhere on Scout.com. Eleven Warriors did report it, however, with ESPN adding a few days later that Meyer had indeed been in touch with the school. (ESPN would know.) Scout's Bill Greene is now, finally, reporting the news. Noteworthy, since Greene has been described by an Ohio State media associate as "a mother------ in the know."

Urban Meyer denies report he's new Ohio State Buckeyes coach - ESPN
"I have not been offered any job nor is there a deal in place," Meyer said in a statement. "I plan on spending Thanksgiving with my family and will not comment on this any further."

Then Again maybe he is heading to Akron

FootballScoop - The Scoop
Akron: Sources close to the program tell us head coach Rob Ianello will be released from his contract following their final game on Friday.

BYU ends negotiations, will not join Big East, according to report - ESPN
The Big East was trying to add BYU as part of its plan to become a 12-team football league. The deal-breaker was television rights. The person says BYU wanted to retain the rights to its home football games and the league could not agree to that.

How Oregon and Nike turned ugly uniforms into a power program

Oregon, Nike And The Future Of College Football - SBNation.com
So I went there. This past weekend, I flew out with a group of writers as guests of Nike, the principal catalyst for that 15-year transition. And through conversations with people from Nike and people from Oregon and then watching the Oregon-USC game, I got the chance to see what's behind those crazy uniforms everyone seems to love so much.

UB leaves no doubt in victory over Canisius - Rochester Amateur Sports | Examiner.com
Filzen sparked an 11-0 run as the Bulls rallied from an early deficit. Coming out of the under 12 timeout, Filzen took a inside-out pass from Mitchell Watt, drove from the right of the basket and finished in traffic drawing contact. After a free throw, the Bulls trailed 15-13.

Buffalo Obliterates Local Rivals - Sports - The Spectrum - University at Buffalo
We got our tails kicked tonight in every facet of the game" said Canisius head coach Tom Parrotta. "All the credit obviously goes to UB, because they put it to us pretty good."

UB's Ostrowski toughed it out to the end - University at Buffalo - The Buffalo News
"It was tough," Ostrowski said. "I wasn't sure if I was going to make it back. It was exciting that I was able to come back, play the whole season and end it on a good note hopefully with a win this week with all my teammates, all my seniors."