Who's Talking Bull? Please don't throw me in the Pryor Patch!

Share All sharing options for: Who's Talking Bull? Please don't throw me in the Pryor Patch! 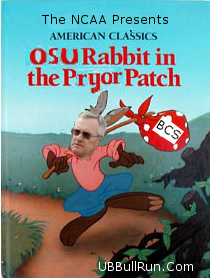 Ohio State looks into claim of tattoos for autographs | BuckeyeXtra
Ohio State is investigating whether several of its football players traded signed memorabilia for tattoos and perhaps other favors from the owner of a Columbus tattoo parlor, actions that could put their eligibility for the Jan.4 Sugar Bowl and beyond in jeopardy, The Dispatch has learned.

C-USA and MWC discuss a bond beyond bowl games - Hawaii News - Staradvertiser.com
Games such as Friday's Sheraton Hawaii Bowl could be a precursor to expanding ties between Conference USA and the Mountain West Conference as the two leagues examine strategic alliances, officials say.

Temple to hire Florida assistant Steve Addazio as coach | Philadelphia Inquirer | 12/23/2010
According to a source close to the situation, Temple will name Addazio, the offensive coordinator at Florida, its head coach Thursday at an 11 a.m. news conference.

Campus Watch - Blogs - The Buffalo News
USA Today has come up with a chart on coaching salaries highlighting the pay of assistants. The 2010 salary chart shows who some of the top-compensated assistants are in the Mid-American Conference

Jimmy Hamel Named MAC Wrestler of the Week - Buffalo Athletics
Following a six-win effort at the Reno Tournament of Champions Sunday, senior Jimmy Hamel was named the conference's wrestler of the week for December 6-12, the Mid-American Conference announced from its offices in Cleveland this morning. This is Hamel's third weekly honor in his time with the team.