3-1 aint bad, lets see how they do against the Valley

Share All sharing options for: 3-1 aint bad, lets see how they do against the Valley

My apologies for not writing a piece after the manhandling that took place over at the Koessler Center on Tuesday night, but I promise you that I was just as impressed as everyone else was. The Bulls were able to score inside and out, pressure Canisius into a large amount of turnovers, but most importantly the Bulls were able to completely outplay the Golden Griffins in both halves. One may think that the Bulls were lucky to have a such a high field goal percentage, but that was solely because the offense played that well. The Bulls took only high percentage shots, and didn't settle to shoot from the outside. The Bulls got the ball into Alston (who is turning into quite a player), Javon McCrea, and even did a nice job getting the ball to Dave Barnett in positions where he could excel. 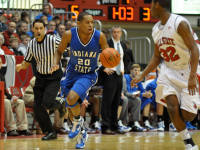 Now the Bulls have to go on a true road game, because playing against Canisius doesn't count as going on the road, and the Bulls were only a short bus ride away from getting down to Youngstown Ohio. The Sycamores from Indiana State have not played too well so far this year, with only a 2-3 record, but they play in toughest mid-major conference in the country and in order to be in the Valley you must have some fairly good players.

Indiana State is a well rounded team that doesn't really have a true scorer who can take over a game, but they have the experience to know how to get it done. 4 of their starting 5 are upper class men, as well as their 2 main minute receivers off the bench. The Sycamores have not even had a home game yet this season, so the Bulls have to expect this game to have a hostile crowd considering its the home opener. That's a major concern for the Bulls since the Sycamores went 11-3 at home last year, which is definitely something to be proud of. Don't expect this game to go as smoothly as the Canisius game.

Buffalo has looked a lot better than most of us thought so far this year, losing only one game because of their inability to shoot from the line. Reggie hasn't really done anything different this year. He still plays the same offense, all the time tight man to man defense, and his typical 9 man rotation with all 9 of them earning more than 10 minutes per game. The only thing really different this year is their ability to really get points in the paint. Yes i know the top 3 scorers to this point play guard positions, but they've had really good success getting true points in the paint with 3 different players, all scoring in different ways. Javon McCrea has shown his upside and potential to be a very good mid-major post player, but the most impressive player to me so far this year has been Jawaan Alston. The most important thing to me about his game has been his ability to play sound defense without picking up fouls. He already has 4 steals and 5 blocks this season while only picking up 9 fouls. Offensively hes been going up to the rim strong which has helped him avoid easy misses, and if you really watch him in the post hes been extremely crafty. I am one of those haters who thinks he should be able to put a dunk down occasionally with how open he gets, but for the time being I wont mock him.