Share All sharing options for: 2 weeks to kickoff: Brandon Williams

Outlook: Williams has played as backup cornerback this summer. He'll challenge for the starting job, but he still looks to be a year away in camp, his development will be aided by live game action this year.

In the first quarter, the slow starting UB Bulls turned a Najja Johnson interception into a field goal and blocked Stony Brook's attempt to tie the game. With momentum, UB attempted another field goal that was missed wide. Both teams traded field goals and ended the half 3-0 Bulls. 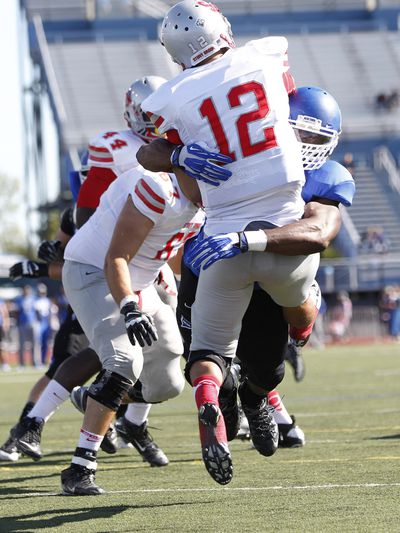 We almost had to eat Creepy Crow Claws, but a win is a win

The teams continued to trade punts, until Stony Brook fumbled a punt return and UB recovered on the Stony Brook 27. Three plays later, Anthone Taylor scored to give UB a 10-0 lead. At that point, UB's defense had forced 5 punts, and held the Seawolves to an average drive of 5 plays for 17 yards. But Stony Brook wouldn't die, and UB's defense got tired. Stony's final four drives averaged 10 plays and 58 yards.

After trading field goals, and touchdowns, UB all but sealed the win in the third overtime. Dwellie Striggles intercepted Lyle Negron, meaning UB only needed a field goal to win. On 1st and 10 at the 13, Anthone Taylor fumbled and Stony Brook recovered to send the game to a 4th overtime.

In OT #4, Licata was intercepted giving Stony Brook a chance to win the game with a field goal. Their 37-yard attempt was missed wide. In OT #5, Stony Brook was forced to attempt a field goal again, this time it was good. UB could send the game to a 6th OT with a field goal, or win with a touchdown. Ub, after opening with a 19-yard pass to Alex Dennison, won the game on a 6-yard Taylor run.