Buffalo offers a scholarship to Trey Kilgore, from Cincinnati Ohio

Share All sharing options for: Buffalo offers a scholarship to Trey Kilgore, from Cincinnati Ohio 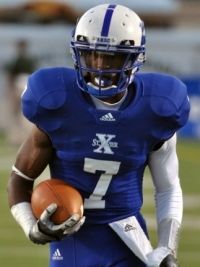 Buffalo Coach Jeff Quinn has entered the Trey Kilgore (left: Photo via via tristatefootball) sweepstakes. Kilgore was extended an offer last week by the Bulls who now join Cincinnati, Boston College, Kent, Akron, Miami, and Toledo who are all bidding for his services.

According to Cincinnati.com he is also getting interest from the University of Kentucky.

Scout still has Kilgore as an unranked prospect, they are also missing the offer from Cincinnati.

The 6-foot-2, 180-pound athlete was used in every offensive skill position last season for St. Xavier. Kilgore, a teammate of Mark Jacob, is an offensive weapon that coaches try to use on every play.

In 2011 Kilgore brought in 69 receptions for 756 receiving yards with his time at running back he brought his total yards from scrimmage to 969 reaching the end zone a total of eight times.

Trey Kilgore and all known Buffalo offers, can be seen on the Bull Run targets page (here)

A big shout out to Ben Tsujimoto for helping me keep on top of all these offers.... At least half of what is now landing on the Bull Run targets are from links he sent me.