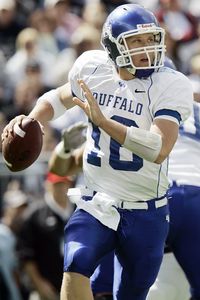 The last time Buffalo played Temple, the game ended on a James Starks run into the end zone. In this game, Drew Willy tossed Starks the ball on the first play, and he picked up where he left off, sprinting away for a 74 yard touchdown. Thanks to the legs of Starks, Willy was 1-1 for 74 yards and a touchdown.

After the hot start, Willy never cooled down finishing 20-22 for 190 yards and 2 touchdowns. Mario Henry gained 125 yards and the defense forced 3 turnovers to hold Temple to 7 points. Willy set a UB record for accuracy in a game, completing 91% of his passes. Willy hit 9 different receivers, Ernest Jackson grabbed 5 receptions and Drew even completed a pass to himself, (for a loss of 17).

Defensively, Mike Newton and Kendric Hawkins shook off a bad outing at Rutgers, and each had interceptions...Newton returned his 50 yards for the Bulls 2nd score.

It is easy to revise history for the Gill era, as a time where a plan was in motion, the athletes showed promise and we were building for a championship run in 2008. However in September '07, we were yet again a team trying to build on another 1 or 2 win season.

I worked my last UB game, admired the coaches we had, and SOME of our athletes but I was not quite sold on Drew Willy. Fortunately Turner Gill's first big recruiting score was New Jersey Quarterback Chris Johnson, a 3 star dual threat QB who would be able to run Gill's offense. But Chris Johnson switched commitments to Boston College, where he was moved to Defensive Back and never heard from again.

We were stuck with the other Jersey QB, Drew Willy. I spent my last days in Buffalo doing what I loved, watching UB's Summer Camp. Turner Gill ended a practice with a huddle asking players what they were excited for, Willy took the huddle and said he was excited to go to Rutgers and win the game in his home state. He had some fire and edge...I started to believe.

A few weeks later, just newly moved into my apartment in LA, I donned my blue and white, optimistic for year two of the Gill era. Sadly we received an unmerciful total team destruction at the hands of Ray Rice's 16th ranked Scarlett Knights. The pessimism set in, we had to hit the road again to face the always annoying Temple Owls...a loss in this game, and the season would probably be over.

The Temple game for me was a pure moment. We never looked this good, this complete...prior to this game Willy had been the QB, by default...after the game, for the first time he was MY QB. Henry went for 100 yards, but there was no question Starks was our back....finally we said, we have our clear leaders, we have starters, we might even have bench depth...THESE are the guys I want to roll with. It was especially pure for me as I spent 3 years with these athletes day in and day out, never really seeing what I saw this day on a buffer full MAC stream that cost 9 dollars and was worth about 90 cents. This is the first time I saw UB really show up serious about playing football.