If the celebration is sick you must acquit!

In the new zero tolerance world of football, both high school and college, what you see to the right can cost you a state championship.

Celebration penalty on TD costs Cathedral High School team title - ESPN Boston
The 18-year-old senior was racing for a score as time wound down in the game against Blue Hills. Video shows Owens briefly raising his left arm and then lowering it as he approaches the end zone. The penalty nullified the touchdown, and Cathedral lost the game 16-14.

He pumped his fist in the air *briefly*. He did not goose step, or hold the ball in front of him. He did not look back at his pursuers and smile. Hell he did not even spike the ball!

Lets all remember that the moronic rule changes are inspired by extreme behavior. You know like running parallel to the goal line until the defense catches up and then going into the end zone. If these changes are the intended result of the altered rules then we have found the Grinch's day job, and no his heart has not grown three sizes yet. 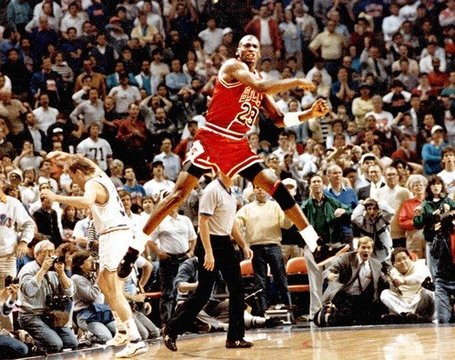 We've went from a situation where some touchdown celebrations were getting out of hand to a place where the refs are out of hand. When an 18 year old, on his birthday, can't pump his fist in the field of play while running for a late go ahead touchdown? whats next?

There were still six clicks left on the clock in game five of the Eastern Conference Championship when Jordan drained a jumper that may have defined his career.

The shot put the bulls up 99-98 and his jump, right after wards, is iconic.

Under these rules that two points might come off the clock and the Cavs go on to the NBA championship. Think about how far removed we are from being fully feeling and acting human beings under this new rule.