Share All sharing options for: Rob Schneider said it best... 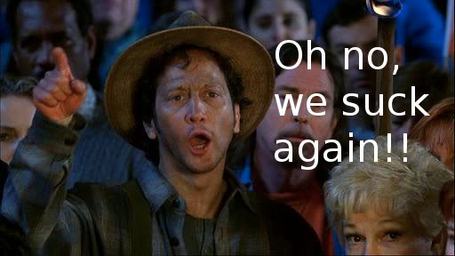 I am sick and tired of saying this but, somehow, its true week after week:

UB has been sliding downhill a little bit each game this season. That slide turned into an avalanche during the past two 'football games'. Im not surprised, or disappointed, that UB is a 2-5 team I fully expected that could happen this season. What's disgusting is the way that the Bulls are regressing.

I won't be doing grades this week because everyone gets an F, right across the board. There was no phase of this game where anyone deserved to pass. The closest to passing we might get are the linebackers and defensive backs but the good done by some guys on those units was wasted by everyone else.

Just to put things into perspective this is the worst loss UB has had since 2002 when Iowa Crushed us 56-7. In 2006 UB came close with a 41-0 defeat at the hands of Boston College.

So many things went wrong in this game that the only way to approach it is chronologically. Trying to approach the game in any other fashion is just so painful.

So lets start with the one area UB fans love to hate, our awful special teams play. The fumble on the opening kickoff took away from what could have been our best special teams game of the season. Decent returns, half way decent punting, and no big Temple returns was a slight improvement.

The real goat of the day was the offense who, again, were unable to pass, run, or block.

The ESPN Announcers kept blaming the opening fumble for taking the wind out of UB's sails but I disagree. If UB did have any energy going into the game, and that in itself is questionable, it was lost when Quinn tried the 'Wild Bull'.


What the creation of the Wild Bull looked like

It's no secret that I like the Wild Cat, as an occasional gimmick not as the opening series in a game where you're already down a score with a brand new quarterback. The FDA approved dose of 'fail' that was the wild bull, and the mandatory terrible UB punt afterwords set Temple up in easy scoring position.

Thankfully Jeffvon Gill seemed to break through Quinn's man crush on Branden Oliver, unfortunately he got hurt. But before he did get hurt he had turned in 4/16 which is as good as any UB half back has played this season.

Once Gill was out the running game reverted back to nothing but QB draws and scrambles. While Zordich showed some impressive push running the ball he's not goig to carry a running game and his style may get him killed.

Speaking of Zordich getting killed lets talk about insane UB pregame move number two (Number one being the Wild Bull). How do you shuffle up the offensive line going against one of the best defenses in the MAC with a new QB.

It was a new experience for me; I've been working there a little bit the past two weeks in practice. I didn't do as well as I wanted to. The second half we decided to go back to the old lineup, it seemed to work a little better. -- Peter Bittner

Despite their speed Temple was averaging just over a sack a game coming in. The UB Line let them dump Zordich five time.

As much as I believe it would be easy to dump on Zordich he had to feel a bit like this after a while:

When Davis got a shot in garbage time he validated that Quinns move to Zordich was not really a problem. After the sole highlight moment of the game, a superb punt return, he took over first and goal only to miss a wide open receiver in the back of the end zone while he was under no pressure.

The wide receivers join the rest of the offense in mediocrity this week with several dropped passes, something we have noe seen a lot of this season.

On the defensive side of the ball UB got pushed around. Temple did whatever they wanted on the ground.

We came out flat and they jumped on us real quick. The tailbacks, they're good players, but it was about what we did not what they did. We didn't fit right and it was third down and we couldn't get off the field. It's just we have to practice and practice hard to play better. Simply put. -- Justin Winters

This game was a huge step back for the defense. At least they held their own, for the most part, against NIU. But whistle to whistle Temple Ran the ball at will, protected the QB, made plays when they had to. A few defesive players had solid games but on the whole the unit played its worst game of the season.

So where does UB go from here?

No way do we crack six wins this season. I just doint see us beating Miami or Ohio let alone both of them. Even the 'easy' games left on our schedule are in doubt. BSU will be a good team if they ever put together a whole game, EMU is better than their record, and playing Akron in the final week is tempting fate.

Hopefully the recruits Quinn brings in add the depth on the Lines that UB so desperately needs in the mean time buckle up for 2006 all over again.