A look at Trevor Scott's legacy at Oakland and the three times Mack and Moore faced off in college.

In the second quarter of the Ohio State game, Khalil Mack took down Braxton Miller for the second time in the game, his 20th career sack as a Bull. 20 was the most sacks by a Bull in the modern era, eclipsing the 19 sacks of Trevor Scott. Mack would finish the 2013 season with 10.5 sacks, a half sack better than Trevor Scott's modern era record of 10 sacks in a season set in 2007. Trevor Scott was selected 169th in 2008 draft by the Oakland Raiders, Khalil Mack 5th overall by the Raiders.

Once again, Mack finds himself following the legacy of Trevor Scott. Although Scott is little more than a footnote in the darkest timeline of Raider football, if Mack can do what Scott did early in his career, it will be a success.

Trevor Scott played 42 games with the Raiders and amassed 13.5 sacks. Since Scott's first season in 2008, his 13.5 sacks stand as 6th most sacks by a Raider. He is 8th in sacks per games played by a Raider since 2008 and only two Raiders had more sacks over a two year period than Scott's 12 sacks in his first two seasons. In addition, only Scott and Lamarr Houston have led the Raiders in sacks in two different seasons since 2008.

Mack and Moore Get Reacquainted

Khalil Mack was more or less manhandled by UConn which is part of the reason why 2010 is referred to as the season we don't speak about. Compounding the problem was Sio Moore and namely the fact that Buffalo couldn't contain him at all. Moore, who at the time also wore #46 before changing to #3, was all over the field with 16 tackles, and was in the right place at the right time to catch a ball deflected by Alex Neutz for an interception.

I'm not sure if both defenses were on display or if both offensive coordinators went brain dead, but I do know this was one of the most boring games of all time. Moore and Mack both contributed to the lack of offense, but unlike the previous year Mack showed himself to be the most intimidating man on the field, as displayed by one of his trademark photos: 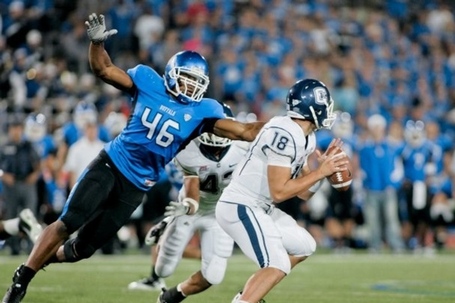 In the closest game of the series, Mack was a force to be reckoned with, but the UB offense had nothing beyond a few trick plays. Sio Moore had a decent day but his biggest play doesn't show up on the stat sheet. Moore hurried Alex Zordich who attempted to throw the ball away, but instead floated an easy interception to the Huskies, killing the Bulls only promising drive of the game.

With Moore playing for the Raiders, Mack led the Bulls to a 41-12 thrashing of the Huskies in 2013. After battling it out against each other each year, Raiders fans won't have to worry about the UB/UConn game disrupting team chemistry this fall, despite playing 15 times since 1995, UB and UConn are not scheduled to face off again in the foreseeable future. After seeing them showcase their talents on opposite sides for the past few years, it will be amazing to watch them attack opposing quarterbacks together.