Share All sharing options for: 34 days to kickoff: Randy Anyanwu

Outlook: Randy was a linebacker last year, but is moving to defensive end. We'll see how he is progressing at the new position this summer.

After a 1-7 start, UB was 2-0 under Joe Licata but the Bulls were heading to a place every native Buffalonian fears, Gillette Stadium. That said, UB was playing an opponent no one feared, the 1-9 UMass Minutemen.

That said, UMass came to play. After a 28-yard punt return to the UB 28, UMass opened the scoring with a field goal. UB's only serious drive into UMass territory in the first half ended with a Brandon Murie fumble. UMass rewarded their defensive effort with a 72 yard drive and another field goal. On their final drive of the half, UMass broke into the end zone with a Wegzyn to Rob Blanchflower TD pass.

Just Go With It 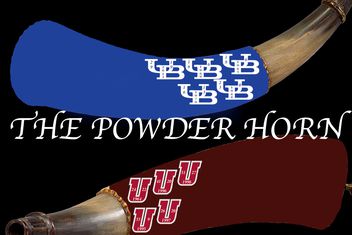 The Powder Horn is back in Amherst, New York!

UB was down 13-0 t the half, and only gained 115 yards on 29 plays. The defense played well, but already faced 43 plays giving up 201 yards. If the game continued in this fashion, the defense would surely break allowing UMass to put the game away. So the defense took matters into their own hands. Okoye Houston intercepted Mike Wegzyn giving UB the ball at the UMass 29. Two plays later, Licata's attempt into the end zone was intercepted by Randall Jette.

This time, the special teams unit had to take matters into their own hands. Adam Redden blocked a UMass punt and Kyndal Minniefield returned the ball 33-yards for UB's first TD. However, the TD failed to spark UB's offense and the punt coverage team proved again to be suspect. A 23 yard punt return by UMass to the UB 41 was converted into a TD 3 plays later, a failed 2-pt conversion gave UMass a 19-7 lead.

Instantly, UB found their offense. UB quickly moved 43 yards from their own 21 to the UMass 36. UB was 0-6 on 3rd down conversions and found themselves facing a 3rd and 16 outside of field goal range, Joe Licata found Fred Lee for 34 yards. Two plays later, Licata found Jimmy Gordon for UB's first offensive TD of the day. A big 19-7 defecit was now only 19-14.

After a defensive stop, UB converts two more 3rd downs, including a Licata TD pass to Alex Neutz on 3rd and goal. UB added an Alex Dennison to Matt Weiser 2pt conversion for a 22-19 UB lead. UB had sacked Wegzyn 3 times to that point, however, after UB took the lead, the defense sacked Wegzyn 5 times during UMass' final 17 plays.

On UB's final drive, Rashad Jean ran 6 times for 25 yards and Brandon Murie ran 7 times for 34 yards and a touchdown during a game sealing 15 play, 80 yard drive that took 7 minutes off the clock. Up 29-19 with two minutes remaining, UB sealed the first win by a Buffalo football team at Gillette Stadium with a Najja Johnson interception.