Share All sharing options for: 61 days to kickoff: Brandon Manosalvas

Redshirt Freshman (2014): Brandon played in 9 games and started 2. He is 1-1 as a starter with UB gaining 4.19 yards per carry on the ground and allowing a sack for every 44.5 dropbacks when he starts.

Outlook: Manosalvas rotated between guard and center last year, and looks slotted to start at center or right guard this year.

After UB's convincing win over UConn, there was a sense that EMU would be a trap game. There was just one problem, you can't catch UB backs Branden Oliver and Devin Campbell, let alone trap them. The two backs combined for 342 yards and four touchdowns as the Bulls easily dispatched the Eagles. 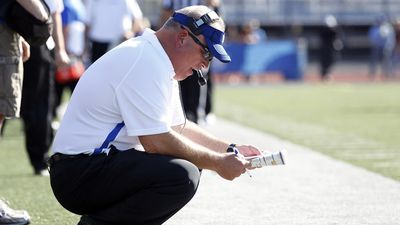 Could it be that Jeff Quinn has finally built a MAC contender?

Branden Oliver scored on UB's first drive of the game, breaking a 60 yard TD run. Jake Stockman forced a fumble and recovered it on the 16-yard line setting up BO's second TD run of the quarter, this time from 2 yards out. EMU pushed into the red zone on their next drive, but they were stopped by a Cortney Lester interception on the 1-yard line. UB then drove 99 yards thanks to 77 yards from Alex Neutz (two catches for 47 yards and two 15-yard pass interference penalties earned). On 4th and goal, Joe Licata snuck the ball over the goal line and UB had a 21-0 lead.

EMU struck back with a Tyler Benz to Jay Jones TD and good field position as Devin Campbell's kick return was stopped at the 11. However EMU was offsides on the kickoff, forcing a rekick, that Devin Campbell took 96 yards for a TD.

In the third quarter UB scored twice more to lead 42-7 and let the second team play out the fourth quarter in a 42-14 win. Joe Licata had a very Willy-like day, with an efficient 15 for 22, 224 yard performance with a passing and a rushing TD. Oliver gained 150 yards and Neutz caught 5 balls for 104 yards. On defense, Lester and Witney Sherry caught interceptions and Blake Bean led the team with 7 tackles.