Share All sharing options for: 9 weeks to kickoff: David Meyer

Outlook: Meyer will compete and most likely provide depth and scout team work in 2015.

Between 1995 and 2012, UConn was a consistent fixture on UB's football schedule. When I popped in NCAA 2003, UConn and Syracuse were designated as UB's rivals. The rivalry failed to develop however as UConn was 13-1 against UB over that time period winning by an average score of 30-11. 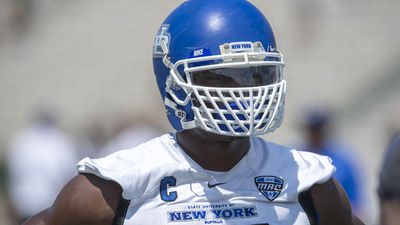 UB get's their first out of conference FBS win since 2009

The Suffering (coined by me in 2005 before the Sabres stole it) was the most crushing blow to UB football until 20XX and UConn was a major part of it. After a great 36-6 win over CMU, a win that made some believe things were getting better, UB closed the 2004 season at UConn and opened the 2005 season at UConn. UB lost those games by a combined score of 67-0. UB went on to lose to Syracuse and Rutgers by a score of 48-3. UB was not ready to compete.

2013 was the last UConn game on UB's schedule and the last chance for UB to take down the "rivals" who had taken so much from the Bulls.

UConn came into the game on a 5 game losing streak, including a loss to FCS Towson, yet the previous week they fell just short of an upset of #15 Michigan the week before the UB game. UB came into the game lucky to be 1-2, after losing at Ohio State and at Baylor, UB snatched victory from defeat against FCS Stony Brook.

It seemed like a matchup of two equal foes, but it was the first of many UB blowouts in 2013. UB and UConn traded scores, but UB scored 4 TDs while UConn managed 2 FGs and a TD (with a failed 2-pt conversion). At halftime UB led 28-12 with 2 Joe Licata TD passes, a Branden Oliver TD run and a Najja Johnson pick-six.

In the first half, UConn gained 208 yards on 49 plays, in the second half, UB held the Huskies to 27 yards on 22 plays. Clarke launched two deep field goals from 49 and 50 yards out and Licata threw his third TD pass of the night for an easy 41-12 UB victory.

UB has been able to enjoy this unanswered win over UConn for 645 days. We'll continue to lord this one over the head of the Nutmeg State for as long as they want to not play us. 2018? Warde?