Is Jackson ready for action?

Share All sharing options for: 41 days to kickoff: Solomon Jackson

Outlook: Solomon Jackson moved from linebacker to defensive end, as a result, Jackson was 17 pounds lighter than UB's last impact DE, Steven Means. We'll soon see the results of his off season training. Anything goes in the summer competition for DE, but Jackson should have a leg up as he had the reps in spring and all summer to adjust to the transition.

UB got on the board early with a Cortney Lester pick-six, the offense gave it back later when a Devin Campbell fumble was returned for a TD. Alex Zordich was able to move the ball but only opened a 14-7 lead. Devin Campbell took a pass 42 yards for a touchdown, but on a drive down to the 12, UB was forced to kick a field goal that was missed. 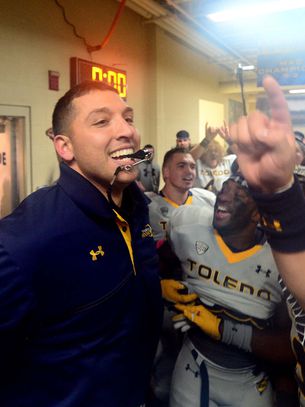 It gets better, probably.

As UB's offense stalled, with five drives with a total of 20 plays, 92 yards and no points, Toledo's offense gained confidence. Toledo scored on three consecutive drives (with two blocked XPs and one missed XP) to give Toledo a 25-14 lead. Buffalo native David Fluellen led the charge with 12 runs for 144 yards and 2 TDs in those 3 drives.

On the next drive, Alex Zordich opened the drive with a 16 yard pass to Alex Neutz, it would be his last pass as a starter. On the next play, Zordich was injured and Joe Licata entered the game. Licata continued the completing 3 of 4 passes for 54 yards and a touchdown pass to Alex Neutz.

Down 25-20 after a failed two-point conversion, UB's offense stalled again, only managing 11 plays for 37 yards in the fourth quarter, only progressing as far as the Toledo 47 yard line. Licata was 2 for 7 for 14 yards in the fourth and ended the game with a fumble on a sack.