Can Chris Doubek be the next Dave Dawson?

Share All sharing options for: 43 days to kickoff: Chris Doubek

Outlook: With Anthone Taylor, Devin Campbell and Jordan Johnson, the UB backfield is spoken for this year. Doubek should provide depth on the practice squad. At his size, 5'7 170, he will be instantly compared to Dave Dawson (5'7 182) who was probably the most shifty running back to play at UB and is still second in UB's FBS history in yards per carry. 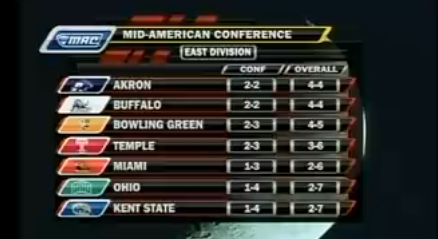 In the first half, it was the Drew Willy show. Willy threw 19 times, completing 12 passes for 187 yards with 2 TDs while running for a third TD. Behind Willy, UB took a 21-10 lead. Naaman Roosevelt caught 5 passes in the first half for 111 yards and a TD. Despite Willy's mastery of the QB position, the best pass of the half came from the punter. On 4th and 3, Peter Fardon completed a 15-yard pass to Mike Newton, which later led to Roosevelt's TD reception. Brett Hamlin caught the final TD of the half, a 25-yard reception from Willy.

Miami scored on their first drive of the 2nd half, turning what felt like a blowout, into a 4-point game. UB turned to James Starks to finish the game. Starks ran 5 times for 16 yards including a 1 yard TD to answer Miami's scoring drive. Late in the 3rd, Richie Smith recovered a Miami fumble which led to a UB field goal and a 13-point lead.

In the fourth quarter, Miami threatened deep in UB territory, but Mr. Turnover Mike Newton forced a J.R. Taylor fumble recovered by Imani Chatman. After 26 carries for 116 yards and 1 TD, James Starks saved his best for last. On his final carry of the game, Starks put the game away with a 62-yard TD sprint.

With the run, Starks, notched the 13th 140+ yard rushing game in UB's FBS history, and the third against Miami. As an FBS team, no team has had UB's running backs "seeing red" as much as Miami, as UB backs have run for 140+ yards seven times against Miami, six times in the last eight meetings.

Starks ran for 140+ yards in back to back games for the 2nd time in his career and, at the time, the third time in UB FBS history.

UB won the game 37-17, and continued the win streak that would take them to the MAC Championship in Detroit.