Share All sharing options for: 65 days to kickoff: Dillon Guy

Overall: Guy is 4-7 in 11 starts, two wins came against Stony Brook, but 5 of his losses came against BCS/Power 5 opponents. While Guy is starting, UB runs for 3.9 yards per carry and allows a sack for every 18 dropbacks.

Outlook: Guy will play left guard next to John Kling. With two seniors on the left side, it should be the foundation of UB's offensive line.

It was UB's second best defensive effort of the year (behind Akron where the defense allowed 17 points). The departure of Quinn and two weeks of practice helped the defense, but derailed the offense. After a wild 3-4 start where UB averaged 33 points per game and 35 points allowed per game, the UB CMU game was strangely tame, which did nothing to ease the pain of a third consecutive loss.

Offense sputters as the Bulls fall to CMU 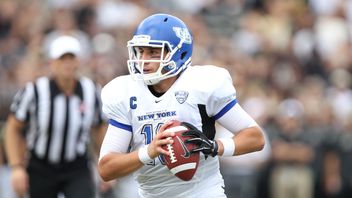 The presumably brief Alex Wood era kicked off with a loss

CMU scored on their first drive of the game, and drove deep into UB territory on their second drive, failing to convert on 4th and 16 from the 24. CMU held Anthone Taylor to 25 yards on 14 carries and forced Joe Licata to win the game, but Licata turnovers fueled CMU's attack. Licata's first interception led to CMU's second TD and a 14-0 lead. UB responded when a Adam Redden strip sack and fumble recovery led to a Joe Licata to Ron Willoughby TD strike.

Devin Campbell returned the opening kickoff of the second half to the 23 yard line and UB quickly tied the game at 14 with a Licata to Malcolm Robinson TD pass. Later a Whitney Sherry Interception gave UB a shot to take the lead, but a Licata pass to the 2 was intercepted. On the ensuing drive, Central Michigan marched 16 plays and 98 yards for the game winning TD.

With two more drives to tie or win the game, UB got no closer than the CMU 32 yard line and CMU earned another close win over the Bulls.